2 From Mako Shark to Manta Ray: The Evolution of the Most Influential Corvette Concepts

Car designers are always pushing the limits of innovation and taking creative risks in an attempt to explore what the future might look like, and many of their designs are getting us quite excited about what the future holds.

Renowned Chinese automaker GAC Group has recently opened a new advanced design studio in Milan, its first one in Europe, and an innovative, futuristic concept car made a surprise appearance at the ceremony.

Called GAC Barchetta, the conceptual vehicle is an electric sports car that combines design cues from the Italian cars of the ’70s and the studio’s previous in-house concepts, such as the modern GAC Time, a luxury electric sedan concept revealed last year.

The GAC Barchetta was created as a show car meant to celebrate the opening of the new GAC R&D Center in Europe, and it was built as a homage to the new studio’s location and Italy’s rich car culture.

The two-seat sports car is the first project of the design team in Milan, GAC Car Culture Series 1, and it features a roofless design and flattened chassis, while also lacking a windshield. Minimalism, efficiency, and simplicity are the words used by the design team to describe the concept.

“We mixed inspiration from Italian car design from the '70s and styling cues from the GAC Time concept. It is a perfect combination of modern design cues and the high-tech EV technology of GAC. It demonstrates the agility of a fully digital studio process by completing a full-size show car within two months,” declared Stéphane Janin, design director of GAC Advanced Design Milan, as cited by Net Car Show.

The team says they can better explain the EV project by splitting it into three parts. The first one is the chassis, which is ultra-flat and contains compact batteries, similar to the concept of a giant mobile phone. The second part is the car’s sleek body, which is made possible through the use of mono-material aluminum. The peculiar bodywork is lightweight, simple, and timeless.

The third part is represented by the minimalist interior, which only includes a few components, like the compact drive-by-wire steering wheel and the driver and passenger seats made from recycled plastic materials. These seats are not your usual sports car seats, as they are suspended to a shell that weighs only 6.6 pounds (3 kg).

“Our goal is to create design languages and concepts that reflect GAC’s vision of a greener future by mixing car culture inspiration and advanced new design concepts. We will try to create and display innovative projects every year during the design week and hope it could help grow brand awareness in Europe and prepare AION launch here when the right time comes,” Stéphane Janin added.

The concept is designed as a roofless vehicle, but there is a panel that slides into the dash to reveal the interior and slides back over the cabin when the car is not in use, making it look like a flat, shining surface.

Another aspect worth mentioning are the wheels, which are designed with a hollow inside and triangular steel bars anchored on the side.

No details are provided regarding the performance, range, or battery capacity, but considering this is just a concept car, that’s not unusual.

GAC Design, established in 2006, is focused on crafting mobility experiences with human-centric values and hopes that the new advanced design studio, located in the design district of Milan, in Via Tortona, will grow into a global creative hub that will attract new talent, ideas, and innovative projects.

“We are confident that this center will enable the meeting of creative resources and the development of cutting-edge ideas between China, Italy, and the rest of the world,” Zhang Fan, vice president of the new R&D Center, concludes. 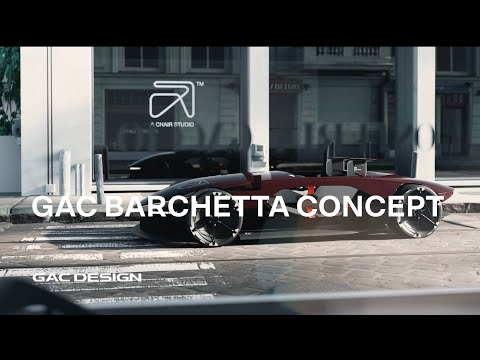