1 2023 BMW X7 Is One Pricey Cookie Down Under, Lineup Comprises Diesel and Gasoline Engines

2 Armored BMW i7 Announced, Electric Sedan Will Soon Be Able to Take a Bullet for You

3 BMW M340i xDrive Goes Pedal to the Metal on the Autobahn, Tops Out Sooner Than Expected

MMA's Christian Eckerlin Has 1,021-HP Keyvany Urus Done in Tiffany Blue, All Over

Although we’re getting close to the grand reveal of the final BMW M without any sort of electrification, the G87 still is testing at the world’s most grueling racetrack. The second-generation M2 looks planted in every turn, and the straight-six hiding underhood sounds undeniably glorious.
13 photos

Captured at the Nurburgring Nordschleife by CarSpyMedia, the prototypes are camouflaged like there’s no tomorrow despite some leaked photos that we’ve previously covered on autoevolution. As expected of the M2, these prototypes feature large brake rotors as well as pumped-out wheel arches.

Gifted with multi-spoke alloys wrapped in sticky rubber boots, the coupes in the featured clip are gifted with quad exhaust finishers, generously-sized air vents, and square-ish grilles with horizontal slats that give the M2 a very different character from the G42-code M240i xDrive on which it’s based.

As opposed to the lesser sibling, the M2 switches to rear-wheel drive to keep the curb weight in check and because it’s more engaging this way. Prospective customers won’t be offered M xDrive because such an option would bring the M2 too close to the M4. Similar to the M4, the Bavarian automaker will offer a manual as standard and an optional automatic.

On this occasion, BMW decided on a torque-converter setup rather than a dual-clutch tranny because of the Cluster Architecture on which the M2 is based. The S58 twin-turbo sixer is expected with fewer ponies and pound-feet of torque compared to the M4 in its most basic of specifications. In other words, look forward to fewer than 473 horsepower and 406 pound-feet (550 Nm). An educated guesstimate would be around 450 ponies.

What else should prospective customers look forward to? Well, iDrive8 with the BMW Curved Display is worthy of mention. Prospective customers may also want to know that G87s will be produced exclusively at the San Luis Potosi assembly plant in Mexico rather than Germany’s Leipzig plant. 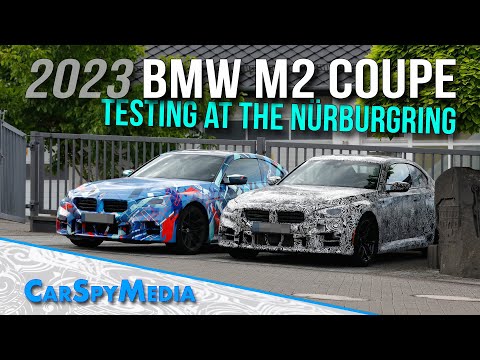