3 Genesis to Reach Europe This Summer, Three Electrics and Dedicated Model in Tow

Home > News > Auto Motorsport
Mircea Panait
The M3 and six-cylinder engines go back to the classy E36. Although BMW has experimented with a fabulous V8 powerplant for the E90, the Bavarian carmaker went back to straight-six mills for the F80 and G80.
8 photos

The M3s we’re covering today are both configured with the Competition Package and eight-speed automatic transmission supplied by ZF Friedrichshafen, a torque-converter design that makes the most of the available resources. Dubbed S58, the force-fed lump in the latest M3 is rocking 503 horsepower (510 ps) and 479 pound-feet (650 Nm) of torque.

The blue-painted car in the featured video is the rear-wheel-drive Competition, which uses the so-called Active M Differential to split the available resources between the rear wheels as the situation demands. As for the gray-painted car, that one adds the M xDrive system that can be turned off completely if you prefer laying down rubber in rear-drive mode.

Roughly 50 kilograms heavier than its two-wheel-drive sibling, the gray challenger is three kilometers per hour slower in terms of top speed. Be that as it may, the M xDrive presents two massive advantages over rear drive.

On the one hand, AWD offers the driver a little more confidence in the vehicle’s cornering attitude as various electronic nannies make small adjustments to keep everything under control. In a straight line, M xDrive also happens to be the superior choice thanks to a big traction advantage.

Joe Achilles had the opportunity of racing his rear-driven G80 against an all-wheel-drive M3 Competition, and guess what? The blue car always loses in a straight line, even in the braking test from 65 miles an hour (105 kph).

Seriously impressive though it may be, the M3CX isn’t as engaging in the twisties as the rear-driven car. What’s more, some people ignore the base M3 with the six-speed manual, although it’s the purest setup of the three. 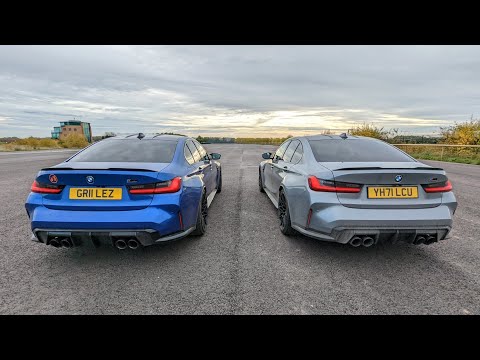