Sadly, this is merely wishful thinking. This is because we are dealing with a second, fresh look at what Khyzyl Saleem, the virtual artist better known as the_kyza on social media, did for his Hagerty-sponsored CGI series. Oh, well, at least we can use it as a classic 240Z to modern 2023 Z dream template…
11 photos

Hagerty, considered not just the world’s largest classic car specialty insurer but also a true Americana automotive lifestyle community, sometimes loves to dabble within the realm of virtual artists. As such, they have started interesting collaborations with pixel masters such as Abimelec Arellano (aka abimelecdesign) or Khyzyl Saleem.

The latter concluded their “Rendered” series a little while ago while the former is still (probably) running strong (although rarer than before) but echoes can still be seen across the_kyza’s social media reel. Just recently, he rekindled the CGI love for the potentially controversial and utterly aggressive G-nose Nissan “400Z,” a Datsun 240Z-style take on the 2023 Nissan Z.

During its first appearance, it did not come just with the vintage styling, though, and instead, the CGI expert opted to exaggerate a little by also implementing a slammed attitude along with a widebody aerodynamic kit “inspired by the Marugen Shoukai flares of the old 240s.” Evidently, even the author knows this digital makeover will not be everyone’s cup of JDM tea, “but then again I don’t make stuff for everyone, you’ll either love it or hate it and I’m ok with that.”

Alas, the new set of renderings that he never released during the official episode presentation (which is also embedded second below) might definitely sway some of the undecided towards approving this reinvention idea. So, while the original G-nose 400Z was in a dark, dimly lit environment to try and exacerbate its white color, this new set goes for a more natural setting that does wonders towards putting it into the proper perspective. Or, at least, that’s our own two cents on the matter… 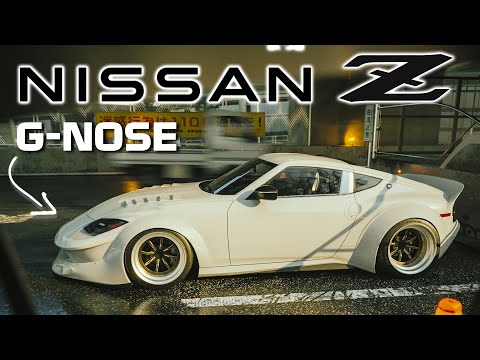