1 Epic Fail: Punks Blow Up Fireworks in a Car for Fame, Get Burned

5 21-Year-Old YouTuber Loves His Lamborghini Aventador So Much He Did a Video of It
Car video reviews:
Coverstory

He’s not the first and most likely not the last person to act like a child when the dealer hands him the keys to a brand new Tesla Model S. After all, the keys to Elon Musk’s famous EV are cool, we have to admit. So are the vehicle’s performances, range and acceleration. Nevertheless, the YouTuber may have pushed the I-like-electric-cars button a little too much with this video.
1 photo
Perhaps you haven’t heard of it before, which is why we’ll take the time to mention that Fully Charged is a YouTube show that regularly talks about environmental friendly cars. It “looks at why we need to change how we think about energy consumption now. From looking behind the myths of renewables to seeking the truth about electric cars, Robert Llewellyn demonstrates what the future could have in store for us all.”

One thing is sure, Tesla Motors is part of that future. It was just the other day Uber CEO Travis Kalanick said he’d buy half a million EVs if Elon Musk found a way to make them autonomous until 2020. That may be a little too far fetched (not to mention the problems the car sharing service is facing in places like France), but we get the message. Green is the new black, and it’s only reasonable for the future of the automotive industry to go that way, especially if we want our children to breathe without a gas mask.

However, the enthusiasm the EV fan shows towards features such as touching the remote to open separate parts of the car, to Teslas Model S’ skill to create the driver’s profile before hitting the road seems to be a little too much.

There’s one thing we do find quite amusing though, the moment Robert was asked to name his new car. We’re not here to spoil the video. We’d like to add that it’s interesting to see the whole experience of buying a new Tesla Model S from the customer’s perspective, for a change. 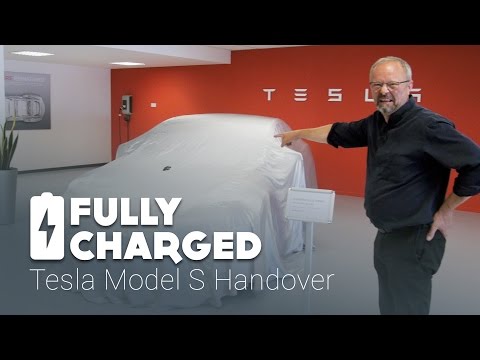