1 1-of-125 Koenigsegg Jesko Is the Pre-Series Production Car, Also an Orange Beast

3 Choosing Between Koenigsegg's Gemera and Jesko Absolut, a Most Enviable Dilemma

Instead of enjoying a relaxing summer vacation, Koenigsegg showed a sample of what they have been working on during the past months. It was an absolute beast of an orange hypercar, as the Swedish company signaled the impending start of series production for the 125 examples of Jesko and Jesko Absolut. Now, it was surprising to see there was no rolling footage of the pre-series production car. But it seemed that was reserved for something special - a complete walkaround alongside Christian von Koenigsegg.
31 photos

We have a feeling that people are starting to love Christian von Koenigsegg not just for running a successful supercar business and being an all-out normal guy with a large family. Instead, he’s also being appreciated for his team’s efforts to make cars with futuristic technologies and because he’s capable of “reviewing” his products like a normal human... and not like a salesman.

After all, just look at him being completely unfazed at the sight of this orange Jesko that’s being used to get rid of the last issues before getting the hypercar out to its eagerly awaiting customers. Among them, the well-known Manny Khoshbin, who’s been “stocking” Koenigsegg’s social media account and was the second fan to post a comment: “WOW! I can’t wait for mine to come in!” says it all.

Now, as far as the actual walkaround is concerned, it’s pretty “tame and idyllic.” We have the orange Jesko sitting on a gravel road leading to a cheerful farm with possible livestock filling the background. And we have Christian von Koenigsegg talking about many details that make this hypercar a true wonder of the current decade. And he’s willing to share a lot of secrets.

After all, he’s not just any other vlogger that learned a thing or two about Jesko in a hurry before filming. He's the man behind the scenes that knows everything. So, you’re not wasting your time as von Koenigsegg slowly circles around the Jesko on his way to the quick peek inside, which only kicks off at the eight-minute mark. But, then again, we can always skip to the incredibly fun parts.

Such as the Ghost Mode demonstration from the 12:02 mark or the moment we’ve all been waiting for. Yes, the Koenigsegg Jesko gets driven with the top off by Christian von Koenigsegg (much to the delight of the camera guy, see him smiling at the 14:33 mark), both on public roads... and on the track. Because, after all, why do you own a supercar company if you don’t get to play with the toys in their natural element, even if they’re not exactly finished just yet? 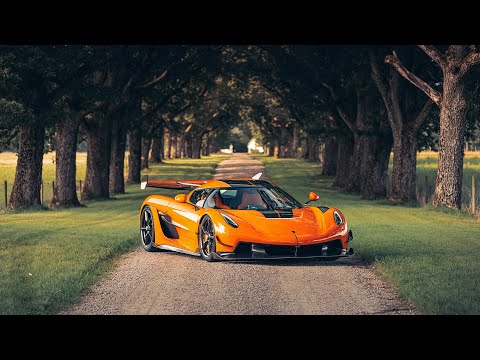