Home > News > Custom Cars
Aurel Niculescu
The good folks over at Hollywood, California-based RDB LA have recently vlogged about a trio of new things that happened in their California shop, and we have a highlight. It’s not big – rather it is long and wide, plus filled with carbon fiber and blue accents.
10 photos

Remember when we noticed that RDB LA was in possession of one of the earliest aftermarket examples of 2022 Land Rover Range Rover customization and personalization in America? Back then, their vlog episode on YouTube only showed the fifth-generation luxury 4x4 during a quick test drive and getting ready for a white-to-black wrap swap.

Alas, the hulking British SUV was not treated well by the aftermarket specialist’s fans, as many of them were keen to remind everyone of Land Rover’s reliability issues and ended up recommending the owner to buy a Toyota RAV4 instead! Well, perhaps opinions will be swayed towards more favorable thoughts as the Range Rover is now almost as black as Sagittarius A* (the black hole at the center of the Milky Way galaxy!). If not, no worries, our star feature from RDB LA for today is this other British supercar!

The full carbon fiber 1016Industries McLaren 720S arrived at the shop sporting a black with orange details exterior theme, complete with orange decals, and orange-dipped black wheels. Now, the owner asked the aftermarket specialist to perform a quick makeover that would make it less cartoony and more stylish (if you ask us). And it was done without too much pain and effort, by the looks of it.

Thus, the full carbon fiber widebody McLaren 720S is now riding smoother on a new set of custom wheels featuring a chrome finish and blue (instead of orange) brake calipers to match the black-and-blue cockpit. And last, but not least, classic car aficionados also have a little treat in the video embedded second below – a 1959 Chevy Impala! 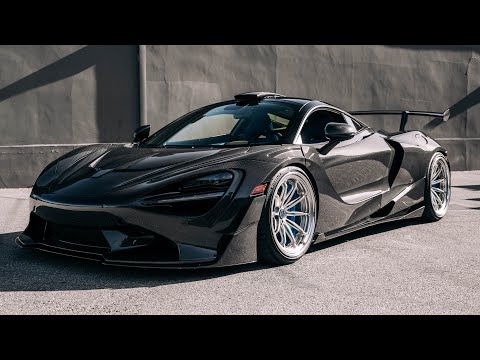