2 For the Modern Pirate: Caronte, a Superyacht That Can Carry Many of Your Toys

3 The Tetrahedron Superyacht Concept, the Boat That Can Fly But Never Did

4 The Rimor X Is Part Explorer, Part Luxury Gigayacht With Its Own Mermaid Lounge

5 Hide Superyacht Concept Blends In by Mirroring Its Environment
Car video reviews:
Up Next

Expedition yachts are hardly ever good-looking, because all focus in their design falls on functionality, as opposed to aesthetics. The Frontier concept from Sam Sorgiovanni Designs aims to change that, by delivering an explorer that is stylish and tough in equal measure.

Frontier Explorer Is Elegant Like a Superyacht, Has the Heart of an Ice-Breaker

Frontier is a 99-meter (324-foot) expedition yacht with a steel hull, aluminum superstructure and an ice-breaker reversed bow that will get it through the waters of the Antarctic or the Arctic in comfort and safety. It is also very elegant, making for a stunning appearance on the French Riviera or in any other part of the world with warm climate, where millionaires love to sail for pleasure or business.

Built with a focus on sustainability through the use of recycled or natural materials and with the possibility of making it more energy efficient in later iterations, Frontier is meant to be the kind of vessel that is the best of both worlds. It has globetrotting range and plenty of luxury amenities, is tough but stylish, and would appeal to adventurers looking to up their sailing game.

One of the highlights of Frontier is the uniquely designed heli-pad. Supported by hydraulic jacks, the heli-pad deploys when it is needed and can retract when the helicopter is no longer on board. It can also double as extra space for a dance floor or even for a secondary gym with direct access from the sun deck above, should the owner be more into this type of fun than actual exploring.

Other luxury amenities include a large cinema, a fully-equipped gym, a two-story beach club with bar, a pool with relaxation area, sauna and steam room, massage room, and a second jacuzzi on the owner’s deck with limited access. The owner’s suite has his-and-hers facilities, a private saloon and a private lounge / office, and direct access to the pool.

There’s a dining room that seats 20, an observation lounge, and a large garage that can house two tenders, two hovercrafts and four jet skis. The 17 available cabins can accommodate 12 guests and 34 crew.

The focus on sustainability is obvious throughout Frontier: Sorgiovanni Designs drew on homeland Australia for inspiration, from the color scheme to the materials used, which include fast-growing woods, stones, seeds and even eggshells. The designer tells The Robb Report this focus could be further emphasized with a more efficient, greener propulsion than the twin diesel engines he incorporated in the original design.

“White Rabbit G for instance, which I designed, has a diesel-electric drive that burns approximately 40 percent less fuel than normally needed on an equivalent volume monohulled yacht,” he explains, referring to one of his previous designs to have attracted worldwide attention.

“There are non-toxic hull antifouling coatings with non-biocide-release that protects marine life; solar panels, LED lights, and an eco-friendly dynamic positioning system for the yacht to drop anchor away from fragile coral reefs,” he adds, on the topic of how cruising could be made even more sustainable.

As of the time of writing, when it’s still in concept stage, Frontier is designed with twin diesel engines that would take it to a top speed of 19-20 knots, and globetrotting range at a cruising speed of 15-16 knots. Further specs have not been included with the renderings for the concept.

With increased interest in vessels that offer multi-functionality without sacrificing the comforts of a luxury megayacht, as well as in hybrid propulsion, the designer believes Frontier will, at the very least, pave the way for other expedition yachts of this type to be built in the immediate future. If you think about it, this is a very elegant way of saying that, should no shipyard be interested in building it, at least it will have shown a very promising picture of the future: a yacht that can do it all.

“It’s the same as a car,” Sorgiovanni says for the same media outlet. “Would you rather buy a four-wheel drive or a sports car? The ideal answer is both.”

Frontier could be that ideal for yachting. 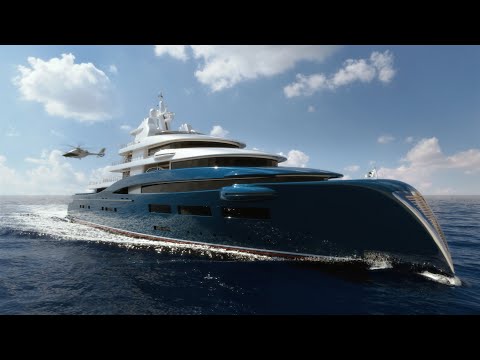