1 Porsche 911 GT3 Gives Its Last Breath in Warehouse, Video Is Agonizing to Watch

3 For Its Next Trick, This Crashed McLaren 720S Will Completely Vanish

4 This Ram 1500 TRX Hides a Dark Secret, You Should Definitely Stay Away From It

From Dream to Junk in 10k Miles: Ram TRX Takes Out Semi, Driver Lives to Tell the Tale

Looking at the wreckage of this once-fine Ram 1500 TRX, it’s hard to imagine that anyone could have lived after finding themselves trapped inside, hence our initial hesitation to share the social media post embedded at the bottom of the page with you.
11 photos

However, after doing a little digging, we found out that the driver actually lived. Proof stands another video that we found on YouTube, made by Pepe’s Towing Service, and dating back to March 2022, who arrived at the scene to clear the road. The man shooting it was horrified by the looks of both vehicles involved, the Ram 1500 TRX, and a semi, stating several times that no one lost their life in this crash.

According to the uploader, the super truck took out the entire side of the tractor, flipped over, and stopped a couple of hundred feet away. The driver was extracted with the Jaws of Life, hence the open-top looks of the 1500 TRX, which is obviously a write-off. The accident happened in Encino, Los Angeles, supposedly not long before the video made its way to the World Wide Web.

In the meantime, the wreckage of the truck, said to have had around 10,000 miles (~16,000 km) on the odo when it was crashed, has ended up in the possession of azcycleparts, as they are known on Instagram, and they will probably disassemble it, and sell it for parts. Well, the few parts that can be saved that is, because you don’t need to be a connoisseur to tell that there aren’t many things salvageable anymore. 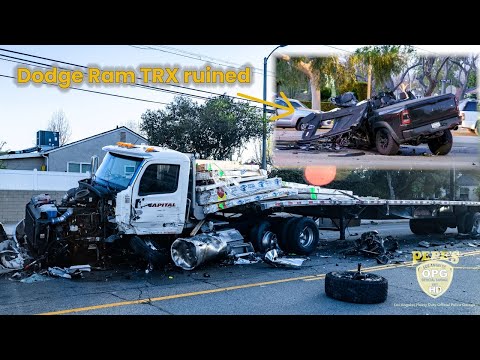