4 People with Hemianopia Are Not Safe to Drive, Study Finds

French Pedestrians Free to Cross the Street as They Please 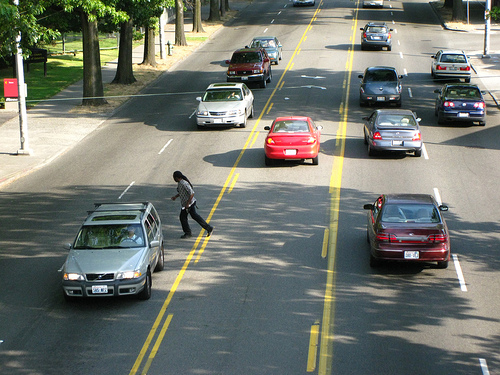 A drivers' nightmare is beginning to unfold in France, where local lawmakers are planning to give pedestrians the power to cross the street where ever and when ever they like. The hand will replace the traffic light, the wave of the hand the color of the traffic light and, presumably, common sense will replace decade of regulations.

The new law which will be guiding traffic in France comes into effect on January 1. Among its many, many provisions, the one regarding the pedestrians stands out.

According to ouest-france.fr, French pedestrians will be allowed to cross the street at will, just by waving their hand as a means to express intent (we're not sure whether the French lawmakers devised a hand signaling system as well).

The drivers will be forced to comply to whatever the wave tells them. Otherwise, they face quite a hefty ticket (EUR135, $180) and some points added to the license.

According to French regulators, the pedestrian precedes vehicles on public roads. They believe that this new regulation will force drivers into moving at lower speeds and pay more attention to what is in front of them.

We have to admit we have no great understanding of how polite French people are with each other. But we bet our year's wages that both in France and elsewhere, such a regulation is likely to do more harm than good

Say a pedestrian crosses the street, you hit him, he says he waved, you say he didn't. No witnesses around. Who's right?