1 A Look Back at the Citroen DS: Arguably the Most Innovative Car Ever Built

4 Modern Citroen DS Is the Electric Flagship We Need

No, we will not be needing an exorcist here. Just because something is unsightly doesn’t mean it’s necessarily evil. Besides, Citroen has such a vast history when it comes to building wacky vehicles, we could forgive just about anything as far as they’re concerned.

The thing is, this 10-wheeled monstrosity wasn’t built by Citroen. Sure, the French carmaker designed and built the passenger vehicle (DS) on which this is based. But the final product was made by Michelin, specifically for testing semi-truck tires at high speed.

Now, this has been called many names throughout the decades. Those of you that know it might remember it being called the Michelin PLR or the Citroen PLR, where PLR stands for Poids Lourd Rapide, meaning “fast heavyweight truck.” It’s also been called the Citroen Centipede, which is fitting, albeit just a tiny bit disgusting.

Regardless of its name, you can’t deny the fact that this is one of the most fascinating-to-look-at vehicles ever made. Like we said before, underneath all that new metal is a Citroen DS platform, although according to The Drive, there’s some DS Safari in there too, which is how you end up with a wheelbase that’s nearly 23-feet (7 meters) long.

There are 10 visible wheels. The front four are used for steering (that’s right, all four), while the six at the rear are directly powered by two 5.7-liter small-block V8 engines, borrowed from two C3 Chevrolet Corvette cars. With each engine putting down approximately 350 hp, this meant the PLR had some 700 hp to play with.

What’s even more fascinating was the configuration of the drivetrain. One of those Corvette engines sent power to three Peugeot 504-sourced axles, while the other powered the car’s 11th wheel, which is hidden from view. In order to see it, you must look inside.

That 11th wheel is what this is all about. Michelin needed a way to test large commercial truck tires at high speed, without worrying about what would happen if there’s a blowout. If say that one large tire at the center of the PLR exploded, you’d still have ten other tires keeping the car under control. You also had a large fender guard positioned behind the truck tire, which would prevent shredded rubber from causing havoc inside this one-of-a-kind Citroen.

Just how fast was this thing? Word has it that it could hit 111 mph (178 kph). In order to quench its thirst, engineers had to install two 23-gallon fuel tanks (that's 105 liters, times two) – you can imagine that fuel efficiency was nothing to write home about.

Nowadays, testing methods for commercial vehicle tires are very different, because the technology is a lot better. You can do these types of tests inside a lab with advanced machinery, which is a lot more efficient, not to mention cheaper and safer. Designing bespoke prototypes can be a drag, from a financial standpoint, especially if they’re not meant for long-term use.

As for where this leaves the PLR, it probably spends most of its time locked away in a vault, whenever it’s not on display at the Michelin Museum in Clermont-Ferrand. 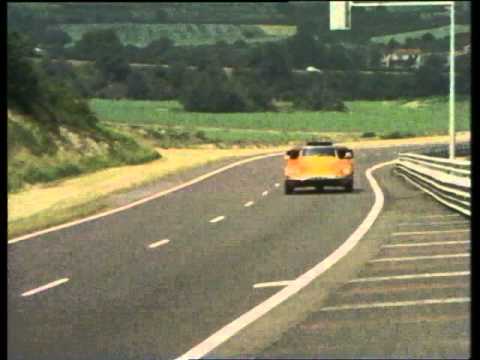