1 A New Leaf 3.0 from Zize Is the e-Bike That Can Carry Even Obese Riders

2 Simon Cowell Will Give Away All His e-Bikes, Toys After Breaking His Back

3 JackRabbit 2.0 Is the Electric Scooter You Could Easily Mistake for an e-Bike

Electric bicycles are very popular right now, offering commuters a safer, more convenient and cheaper alternative to getting around the city, while also having fun with minimal effort. What e-bikes are not, though, is light.

Freicycle Is the World’s Lightest e-Bike at 15 Pounds. It’s Fast, Too

The average e-bike will weigh some 66 pounds (30 kg), but you can find considerably lighter or heavier ones, depending on how much you’re willing to spend. For instance, newcomer Eeyo 1 from Gogoro is 26 pounds (11.7 kg), which is perhaps one of the lightest motorized models on the market, but it will set you back $3,599.

The Freicycle is even more expensive than that, but it’s also lighter still. It’s also just a prototype and there are no current plans to bring it into production.

The Freicycle was designed by mechanical engineer Dennis Freiburg from Germany, and was verified by the Guinness Book of World Records as the lightest e-bike in the world in December 2019, in Dortmund, Germany. It weighs as little as 15.5 pounds (6.872 kg) and, even though you can’t tell by looking at it, it’s motorized.

“Mostly, the people cannot believe that it is an e-bike,” he said at the time. “They keep lifting it up and saying crazy how light it is.”

Though Dr. Freiburg set the record a while back, it’s just now that he’s disclosing the recipe to his winning design. The secret, he tells New Atlas, was to take the lightest frame out there (carbon fiber, of course) and add to it only the bare necessities, either from carbon fiber or 3D printed. The goal was, from the start, to get into Guinness – but the project also served as part of a project for his doctoral degree. Talk about killing two birds with one stone e-bike.

Starting from a 2016 Merida Scultura bike, which has a carbon fiber frame that weighs 2.2 pounds (1 kg), Dr. Freiburg added rim-mounted brakes, carbon rims, full carbon crank and 3D printed pedals. He went through several combinations and alternatives until he got the lowest weight possible.

For power, Dr. Freiburg also wanted something that would add as little as possible to the total weight. There are some hub or mid-mounted motors out there that are light, but not as light as he needed them. So he turned his attention for something that’s been around for years: friction drive, where a powered roller is pressed against the rear tire, making it spin.

Because Dr. Freiburg lives in Germany, the bike has been electronically limited to 250W and 25 kph (15.5 mph), but he says it can reach top speeds of 48 kph (30 mph) without the limitations. Unlike with standard e-bikes, the weight on this one makes it as easy to ride in non-assisted mode as it’s in motorized mode.

Another challenge with the bike was the battery, because Guinness demands a 137-Wh battery in order to establish any record in the e-bike category. So Dr. Freiburg built a battery inside a water bottle, which is he then placed in a 3D-printed cage on the seatpost. The battery, he says, is good for 19-35 km (12-22 miles), but the rider can always carry a secondary “water bottle” for extra range. The lid on the bottle turns the battery on and off, and can also be used to set the pedal assist levels.

Since this was a bike built for science (and Guinness) and because Dr. Freiburg had plenty of backup from partners like the TU Dortmund University, Karlsruhe Institute of Technology, Velotech and Merida Bikes, money was not an issue.

The total cost of the Freicycle shot up to €20,000 ($23,866 at today’s exchange rate) which, yes, is a ton of money. And it also hints that this may never go beyond this project stage. 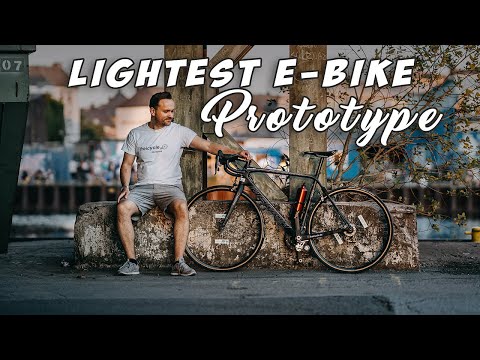