4 Yet Another Lamborghini Aventador Seized for Lack of Insurance, Could Be Crushed

5 Benjamin Mendy’s Lamborghini Aventador SVJ Is About to Get Crushed by Cops
Car video reviews:
Coverstory

Police in the United Kingdom do not mess around when it comes to seized cars. Whether a vehicle is impounded for lacking insurance or more serious offenses, it faces the crusher if the owner can’t fix whatever is wrong with it in a short timeframe.
5 photos

More often than not, this means that a very expensive and possibly rare vehicle gets crushed. This Ferrari 458 Spider that died a very painful (and painful to watch) death a couple of years back tells an even more intriguing story.

This white Ferrari was the property of Zahid Khan from Birmingham. He is a self-titled playboy and entrepreneur currently living in Dubai, where he fled right before he was convicted of conspiracy to commit fraud, perverting the course of justice, and concealing and converting criminal property in relation to a number plate scam, as per Birmingham Live. In layman terms, he set up a fake license plate scam targeting a lottery winner and is said to have registered existing number plates with the DVLA to be able to sell them on.

Khan faces ten years behind bars, plus a hefty amount in fines and assorted taxes. Meanwhile, he’s chilling in Dubai with celebrity pals like Floyd Mayweather, Busta Rhymes, NeYo, Akon, Cuba Gooding Jr., and even Salt Bae. From Dubai, he’s suing the police for crushing his Ferrari without as much as sending him a note to inform him of it.

The car was seized after he drove it to court for a hearing on an unrelated case, something driving-related. The West Midlands Police say that it was seized under suspicion of having fake plates but was kept because it lacked insurance and was a Category B vehicle – meaning a vehicle deemed by the insurer as structurally damaged and unsafe for the road, one that is a write-off.

Khan claims that the car was seized because he was set up. He also says he showed up in court with documents proving the car had valid insurance and no issues with the chassis, only to be informed that the cops had crushed it. They didn’t even inform him, so he’s taking them to court.

In a statement cited by the same media outlet, Khan laments the destruction of personal property that caused him severe anxiety and stress, still felt to this day, and notes how an auction for parts would have made more sense. He says the engine alone could have repaired many potholes or even sent a much needed-cash infusion to the police or the NHS.

The lawsuit against the police was filed at the beginning of the month, two years after his formal complaint was denied.

“Zahid Khan has previously lodged a letter of claim directly with the force which has already been denied,” a West Midlands Police spokesperson says in a statement. “We have now received notification he has issued proceedings before the court, we will respond to the claim via the court process in due course.” 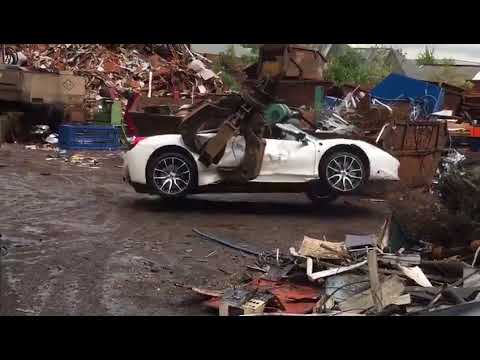