3 The Mustang That Saved the Pony Car

5 Ford F-150 vs. Toyota Tundra vs. Ram TRX: Which One Is The Quickest Tow Truck?
Coverstory

Cristian Gnaticov
Built between 1993 and 2004 as the successor of the Fox Body, the fourth-generation Ford Mustang wasn’t exactly known for being a dragster in disguise.
7 photos

Sure, it did get some significant improvements over its predecessor, yet it is quite possible that the quickest mega hatchbacks out there would steal its lunch money, and that’s without any outside intervention.

However, while the stock fourth-gen Mustang is not exactly something to write home about, this particular example is. It was filmed at the Street Car Takeover earlier this month, at the Bradenton Motorsports Park in Florida, putting its money where its mouth is by taking on some truly powerful models.

Despite looking rather tamed, unless one counts those drag radials, it hides a dizzying amount of thrust and a stick shift. As you can imagine, we cannot put our finger on the specifications, yet considering that it is a 9-second car down the quarter-mile, we might be looking at somewhere around 1,000 horsepower, or perhaps slightly more. That’s definitely enough to put some big names in the obituaries, and the Ram 1500 TRX is just one of them.

The Mustang in question met the super truck for a good-old quarter-mile battle, and not only did it beat it, but it simply humiliated it. In case you forgot, without any mods, the 1500 TRX has 702 hp and 650 lb-ft (881 Nm) of torque to play with, produced by a supercharged 6.2-liter HEMI V8. The engine works in concert with an eight-speed automatic transmission, and four-wheel drive, rocketing it to 60 mph (97 kph) in 4.5 seconds, and up to a less impressive top speed of 118 mph (190 kph).

Now, if we were you, we wouldn’t bet on the super truck at all, because as we already mentioned, it was trampled by the old muscle car. Nonetheless, the latter did try its luck against other quick vehicles, and you can watch all races on video down below. 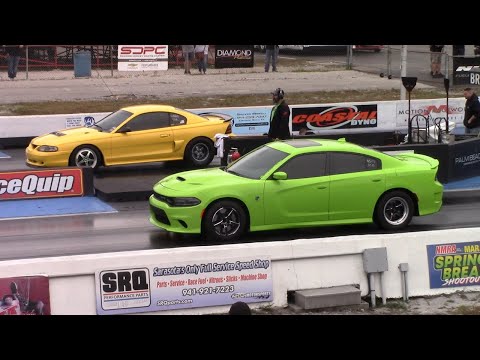