4 Downfall of the Human Drivers, or How Technology Is Making Them Redundant

In AD79, Mount Vesuvius erupted, obliterating everything in Pompeii and surrounding sites, including the nearby town port of Herculaneum. Historians believe that Pompeii was covered in a thick carpet of volcanic ash, which brought down buildings and killed off people but, ironically, also helped preserve a lot of items just as they were.
10 photos

Historians believe that, right before buildings started falling down and the actual earthquake shook the ground, and before air temperature rose so high as to make blood boil and heads explode (this is an actual theory on how victims in Herculaneum found their demise), Pompeii was covered in a layer of ash as high as 9.8 feet (3 meters). This carpet of ash has actually preserved stuff like household items, human and animal remains, parts of buildings and the recently discovered iron chariot.

Here at Autoveolution, we’re all about horsepower, and this is a related finding that’s too special to pass without mention. A very special, ceremonial iron chariot has been found in Pompeii in near-intact shape, iron wheels and ornate decorations and all. The Archaeological Park of Pompeii describes the find as “exceptional” and the only one of such high value in Italy, due to the excellent condition of the chariot and the fact that they’ve been able to dig it up in its entirety.

The chariot is believed to be an Italy-specific type of ceremonial chariot called pilentum that was used by the elites for a variety of ceremonies, including parades and weddings. Think the stretch limos of today, but adorned with bronze and tin ornaments depicting cupids and couples engaged in all manners of explicit poses. Historians believe it was also put to use to ferry the new wife to the husband’s house.

The chariot rode on four high iron wheels that were “connected by an advanced mechanical system,” the press statement notes. The carriage was light and relatively small (0.9 x 1.4 meters / 2.9 x 4.6 feet), since the occasion only required it to ferry one or two occupants. The seat was surrounded by a metal arm and backrest.

“The carriage is richly decorated along both sides with alternating engraved bronze sheet and red and black painted wooden panels, whilst at the rear there is a complex and extensive decorative system featuring three distinct registers with a succession of bronze and tin medallions with figurative scenes,” the description of the chariot notes.

The chariot was found in a double-level portico connected to stables at an ancient villa at Civita Giuliana, north of Pompeii. At one of the aforementioned stables, remains of three horses, including one still with the reins on, were found on a previous occasion.

The finding was initially reported in January, as part of local efforts to combat illegal smuggling of historic artefacts from the area. Archaeologists were able to fully uncover it after several weeks, and a glimpse of the complicated process is shown below. 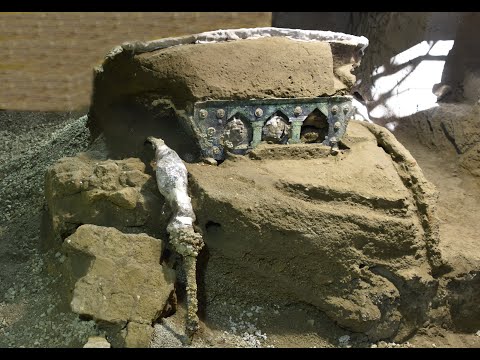