1 Buy a Photo Taken by Lewis Hamilton. No, Really, It’s for Charity

People have been complaining about the lack of excitement provided by the Formula One races lately, and the situation has dragged on for quite a few seasons.
1 photo
The FIA has probably lost count of all the reasons invoked by the public, which might explain why it's chosen such a ridiculous and largely insignificant solution. Well, it will hopefully not be the only one, but even if it's part of a larger package, it still is quite laughable.

So, instead of doing something to level the playing field, the FIA decided that something had to be done about those pesky exhaust systems, to allow drivers to overtake each other without the use of KERS and just turn it into a competition fought more on the track and less behind the scenes.

Yes, the current piping that leads burnt gases out of the engine was deemed as a possible cause for the sport's lack of public engagement, so the teams were ordered to do something about it. More notably, a solution was found to increase the noise made by the Formula One cars - something people have been accusing ever since the number of cylinders was reduced - with the help of a very simple trick.

Here to explain it is Andy Cowell, Head of Mercedes-AMG High-Performance Powertrains, even though, frankly, they could have sent the janitor just as well, since it doesn't require any technical knowledge. In fact, it's so basic it reminds us of Volkswagen's miraculous solution to fixing its faulty diesel engines.

So, if you're curious to find out where those two extra decibels you'll most probably not hear the next time a Formula One car passes by come from, then watch Mister Andy Cowell provide a very simple explanation, complete with an eloquent drawing.

If you don't feel like it, then here's the jest of it: right now, the exhaust gases are fed to the turbocharger, and are then evacuated through a large diameter pipe. To control the speed of the turbocharger, the system is fitted with a wastegate that can bypass the turbocharger and send the exhaust gases directly into the large tube. Now, after careful acoustic consideration, FIA has decided that having this wastegate deliver its load directly into the atmosphere without passing through the main pipe would make the cars sound more aggressive. And this comes from the motorsport with the largest available budgets... 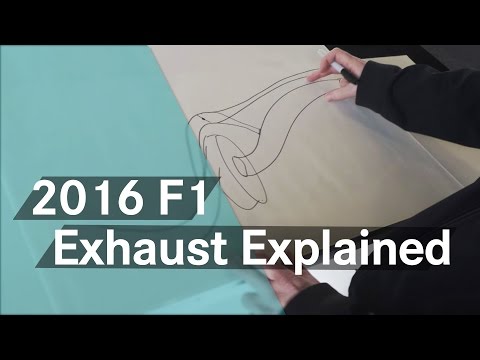