4 The Roborace Car Gets Near-Final Version, Looks Even Better

Vlad Mitrache
You may not be very excited about Formula E, but the thought of having a racing event held on the legendary streets of New York isn't something we've heard much of lately, so it should make for an interesting experience.
1 photo
For the first two seasons of the series, the final race of the season was held in London, but now the organizers are announcing a welcome change. The season conclusion will do what lots of people did over the years and cross the Atlantic into the United States of America, land of the free and home of the Long Beach ePrix.

That's right, for those who didn't know, the Formula E isn't a stranger to this part of the world. For the two seasons so far, once race in April has been held at Long Beach, but this year's calendar hasn't confirmed whether the tradition will be kept, or New York will become the only stage for the Formula E on American soil in the 2016-2017 season.

The actual course of the two-day event isn't set in stone, but FIA has released a possible map which shows it will take place near the Brooklyn Cruise Terminal in Red Hook. The current layout has two very long straights and two shorter ones, with a few slow turns and three or four fast ones. It's a good mix that should provide plenty of overtaking opportunities to the drivers.

Formula E has recently become more appealing for car manufacturers (Audi, Jaguar or Porsche have all expressed their interest one way or another) and the public alike after FIA allowed the teams to tinker with the cars' motors, gearboxes, and inverters. A few more modifications over the previous season regarding the vehicles' weight and total power are likely to make the already thrilling races even better. The new season starts in just a few weeks on October 9.

Most people's criticism over the series was its lack of acoustic presence, but that's something that will never change. If having silent cars is the price we have to pay to get to see cars racing with the Manhattan Island in the background, then we're OK with that. Besides, the actual action on the track is more important than the need to wear ear protection at a race, isn't it? 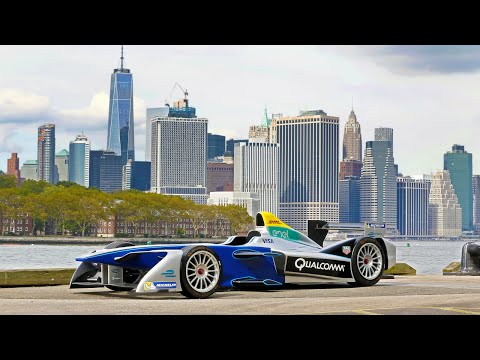