Vlad Mitrache
www.autoevolution.com/news/faraday-future-finally-launches-the-ff-91-feels-like-it-should-cost-1-million-114319.htmlThe more we see of the Faraday Future's FF 91, the harder it gets to think about the car not making it into production. The footage released by the company so far hasn't been too impressive, starting with the presentation itself, but watching the car at work - that changes things.
1 photo
Faraday Future is boasting a ridiculous acceleration time for its electric crossover, and the thing that makes it so absurd isn't that it's so tiny (2.39 seconds for the 0-60 mph run), but that it just manages to beat the P100D with Ludicrous+ by just 0.01 seconds. Surely these measuring devices have some sort of error margin, so does that hundredth of a second really count?

Well, no, it doesn't, and that's because the FF 91 is a beast at accelerating no matter what the numbers say. The company brought the two drivers of its Formula E team, Loic Duval and Jerome D'Ambrosio, for a hands-on encounter with the FF 91 prototype.

As we've seen before, the two vehicles that still wear the digital camouflage are far from being production ready with a barren interior where only the most vital amenities are installed - i.e. four sport chairs, a steering wheel and the gadgets needed by the drivers and engineers to read the car's parameters.

The start of the video is a little bit embarrassing as it's so obviously scripted - and Loic and Jerome, as likable as they are, they're no actors - but the pair does seem to ease into their roles later on and appear a lot more natural.

You can probably put the change in their behavior down to the car's abilities, as they seem genuinely impressed. And, considering so were we despite having a computer screen separate us from all the action, it's easy to understand their reactions.

The two things the video insists on are the acceleration with or without launch control, and the four-wheel steering system. Matt Lubbers claims the FF 91 is possibly faster to the 60 mph mark than a Formula One car, which only goes to show the FF engineers can get a bit overexcited at times (F1 cars can do it in as little as 2.1 seconds).

The four-wheel steering is a lot more interesting. Even though there are plenty of other cars that use it - Porsche 911s, for example, but also the Renault Laguna - it's not a mainstream feature despite its obvious benefits.

At lower speeds, the rear wheels turn in the opposite direction as the front ones to reduce the turning circle and give the vehicle more agility. At higher speeds, though, they turn in the same direction, making direction changes a lot more stable by reducing roll. Lubbers says the FF's system is intelligent and doesn't simply rely on speed to decide which way to turn the rear wheels.

We have no doubt that somebody driving an electric car for the first time or an employee of Faraday Future (as these two Formula E drivers kind of are) would be convinced to buy one of these in an instant, but what we'd really like to hear is the opinion of a Tesla owner. One that isn't completely brainwashed by the brand would be ideal. Stealing customers from Elon Musk's company, that's going to be FF's real test. 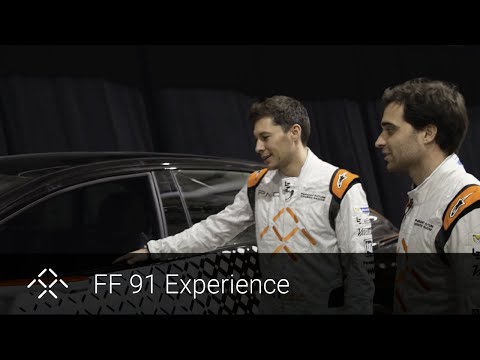