2 Concept Cars of the Future – Hyundai Mobis M.Vision S Can Predict Your Mood

5 This Is YoYo, the World’s First 3D-Printed Electric Car
Coverstory

Elena Gorgan
Some automakers imagine the future as driverless, fully automated and still very much grounded. Italian design firm Lazzarini Design Studio looks to the skies for a glimpse into what’s to come.
15 photos

And what it sees there is nothing short of glorious: a flying car with extended autonomy and considerable range, and a design that recalls the iconic style, the curves and the geometry of the 1950s Formula 1 Ferraris. As Lazzarini puts it, when you think of the future, you must not forget about the past. This concept of a flying car is the embodiment of that.

Lazzarini Design Studio has a reputation for putting out ideas for concept cars and aircraft that stand out for their looks, as well as a propensity for blending vintage elements within futuristic architectures for the most striking results. Lazzarini is also doing yachts, and some of them are already available for order. If you have the money.

More recently, at the end of 2019, Lazzarini unveiled the F33 Spaziale yacht, a fully-customizable rocket on water available with a series of layout and engine options. The base model starts at $610,000, while the full-feature electric model will cost you upwards of $1.6 million.

Back to the topic of this stunning flying car, it’s dubbed the FD-One, which stands for Formula Drone One. It’s a two-passenger flying vehicle that promises to deliver both on the performance side and on aesthetics. FD-One is retro-futuristic, and by the looks of it, comfortable as well.

It draws on the Ferrari-designed Formula 1 race cars of the ‘50s but it’s actually a tricopter powered by a hybrid system that combines electric motors with a gasoline engine. It’s a tribute to the past and the stellar work of engineering that were the F1 Ferraris, adapted for a future where mobility moves upwards for more convenience, more efficiency and more speed.

Lazzarini imagines the FD-One would be powered by 6 electric motors: 4 in the front and 2 in the back, situated near the propellers. Under the hood would be a V12 engine that would connect to the electric motors through a belt system. However, 3 battery packs would also be included in the underside of the flying car, for good measure.

The design firm doesn’t go into the details of the decision to make the craft hybrid instead of fully electric, but it’s probably because it wanted to keep the connection to the past.

FD-One would weigh 1,984 pounds and measure 24 feet in length, being able to seat 2 people comfortably in the cockpit. The fact that it’s not designed with a roof would imply both occupants wore special suits and helmets. As you can see in the video available at the bottom of the page, this only comes to further emphasize the vintage feel of the craft.

With an all-carbon fiber body, the FD-One would retain the cockpit, exhaust pipes and racing stripe of the cars that inspired it, but soar through the skies at speeds of up to 310 mph, according to the designers. Lazzarini estimates an autonomy of 3 hours, which is not a lot but it’s enough to get you one-way through your daily commute before having to plug it in again.

Or you could use the V12 as backup for longer rides, assuming hot swappable batteries will not be an option. By the looks of the craft, though, it doesn’t look like it was imagined for extended traveling.

And here’s the craziest thing about this concept flying car: according to DesignBoom, it could soon make the transition from paper to the real world. Lazzarini says it’s talking to investors to get the idea into the next stage. Talks may never translate to anything more than that, but it’s a start. Sometimes, the world needs dreamers to conjure beautiful things like this Formula Drone. 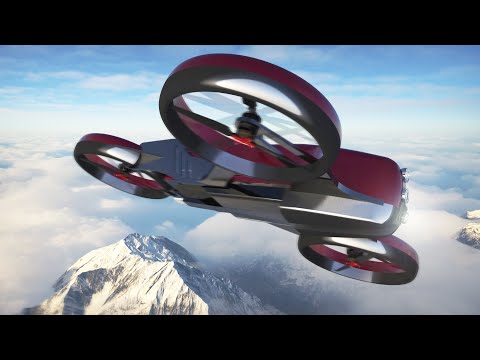