2 The Stig Drives an Aggressive Twin-Turbo Lamborghini, Can't Stop Laughing "Like an Idiot"

3 Top Gear's Stig Drives and Owns a German Car, It's a Mean Machine

4 Stig Drifts the Alpine A110, Car Feels Like a Clumsy Drift Queen

5 Stig Inserts Another Drift Coin, Takes the Ariel Atom 4 on a Slightly Wet Course
Car video reviews:
Up Next

Former Stig Tries Out His First Hybrid Ferrari, Goes Flat-Out in an SF90

Remember what is now referred to as "old Top Gear?" Along with Pepperidge Farm, we also remember. Ever since then, the show had a professional racing driver for track tests, and that driver's identity was concealed. The driver was referred to as The Stig, and his identity was revealed many years after he was replaced.
8 photos

Now, in 2022, we know that Ben Collins was The Stig, and he is still involved in the automotive industry in one form or another. This time, the folks over at Drivetribe offered him a test drive with the latest hybrid from Ferrari, the SF90. It was on the track, which means that the former Stig was well within his element.

Since the cat is out of the bag for many years now, and the BBC would not like to see Ben Collins in the signature racing overalls with matching helmet, gloves, and boots, he is very much himself in this video. Instead of listening to audiobooks during hot laps at the Thruxton circuit, the former Stig serves a portion of beans to the Italian supercar while he delivers his opinion on what it is like to drive.

As Drivetribe notes, this is the first hybrid Ferrari that Ben Collins gets to drive, as he never got the chance to drive the LaFerrari. We can think of several other people in that situation, as well, but we digress. So, the SF90 will have to make the most of it for the racing driver turned TV personality.

From the beginning, Collins starts his review in complete silence, as the Ferrari SF90 is capable of driving on electric power alone, and it uses its front axle motors to do so. That results in a front-wheel-drive electric Ferrari, which would probably upset "il Commendatore."

After stepping on the go-fast pedal for longer, the hybrid system will decide to switch on the internal combustion engine, and the SF90 gets a run for its money. Yes, the former Stig is no longer in racing overalls, but in a leather jacket, and that does not stop him from driving a car as if he stole it. Watch him in action below. 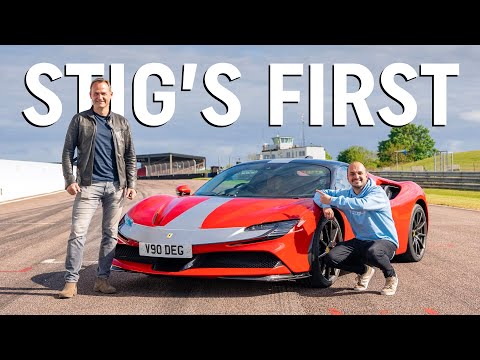