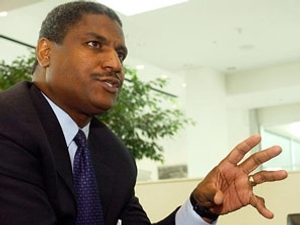 Smart move for Toyota, some might say... The Japanese carmaker announced it has managed to convince former US Transportation Secretary Rodney E. Slater to lead the soon-to-be North American Quality Advisory Panel, an organization set up to address safety issues and concerns regarding Toyota vehicles.

"I am pleased that Secretary Slater has accepted our invitation to lead the distinguished group of safety and quality experts who will help Toyota to improve its quality controls in North America,” Yoshi Inaba, Toyota North America president said.

The first order of business for the panel will be to look into the electronic throttle control system (ECTS-i) installed in Toyota and Lexus vehicles. According to the carmaker, the panel will have full access to extensive testing previously conducted by Toyota, as well as to independent studies.

Slater is free to hand pick and appoint members to the panel. Toyota says the group will function similar to the Toyota Diversity Advisory Board. The findings of the panel will be made public when they become available, Toyota says. We are sure Slater's presence on the panel will do nothing than to add weight to the findings.

"Over the years, Toyota engineers have extensively tested our electronic throttle control system and have never confirmed a single case where the ETCS-i was the cause of unintended acceleration," Inaba continued.

"Nevertheless, given the recent speculation and concerns regarding unintended acceleration in Toyota vehicles, we believe it is essential to provide our customers and the general public with additional confidence in the integrity of our electronic systems.”