5 Squirrels Stash Walnuts in 1974 Porsche 911 in Switzerland, Fill Up Engine Bay
Car video reviews:
Up Next

Seven-Door, 23-Foot-Long Pontiac Catalina Is as Ridiculous as it Sounds

What do engineers do when they get bored with designing parts for the Curiosity Mars rover? They put their engineering skills to work and build the most sophisticated obstacle course for squirrels.
9 photos

Mark Rober is a former NASA engineer who worked for 9 years with the agency but now he’s made it a hobby to test the mental and physical limits of squirrels. And to protect his nuts. Literally!

The engineer built what looks like the most complex obstacle course for squirrels, inspired by movies such as Ocean’s Eleven, Mission Impossible, and the like.

The dizzying maze can give squirrels nightmares as they have to start all over from step one every time they mess it up. It takes up most of his backyard that now looks like a science experiment.

The obstacle course took him around two months to be completed, which is no surprise given its complexity. We’re sure that once they face it, squirrels will think twice before planning their next nut heist.

Rober laid a “buffet” with nuts with a security guard that pops up when squirrels exceed their 1 oz limit. They have to take a helicopter ride on a zip line to reach a wall of moving bricks. The furry thieves have to climb ropes and ladders and go through a sophisticated rooftop maze that looks like a building vent system.

And because this is an action movie-inspired challenge, there’s also a laser maze to cross and a wooden safe to crack. He called it Fort Knuts, and it's where all the “moolah” is, as it is filled with walnuts.

The whole project started from the desperate attempt of Rober to protect the seeds in the bird feeder he installed in his yard during the lockdowns. What began as an engineer trying to pursue bird watching to kill some time, turned into a "mission impossible" course meant to challenge even the wittiest and most skillful squirrel in the world. 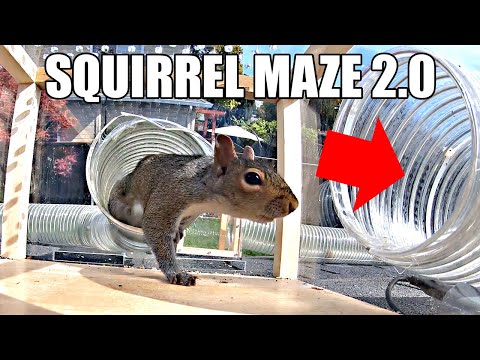