5 Funky Tram Hits Like Karma
Car video reviews:
Up Next

Forget About Rio, the Real Olympics Was in Berlin and It Involved Streetcars

No, just kidding, Rio is going to be much better, but it sure as hell won't be nearly as awkward as this contest between streetcar drivers from different European cities.
1 photo
The TRAM-EM has reached its fifth edition this year (how could you live without not knowing of its existence until now is beyond us) and, as any self-respecting event, has grown over the years to include 27 teams from 17 countries.

Hosting the event was Berlin, the German capital (if you stick around until the end, you'll probably know more about Europe than your high school geography teacher at this rate), which is rather fitting considering how the Germans don't really have any problem making a fool out of themselves by holding all sorts of weird festivals, contests, and fairs (or their neighbors the Swiss, in this case). And in case you think we're exaggerating, have a look at the official song of the competition.

The TRAM-EM consists of several trials, but none is more entertaining than the streetcar bowling (you can thank us for not showing you those later). Seriously, though, pushing an air-inflated ball with a super-heavy tram is so ridiculous, it's actually fun... in a very weird way. It's almost like watching curling, and that's a real winter Olympics sport, so let's not be too harsh on TRANS-EM.

Anyway, here's a very short clip with what was possibly the best... throw (?) of the competition, and a longer one to show just how tedious the whole event was. Oh, and Budapest won. Hurray for Budapest (that's Hungary's capital, in case it sounded familiar). 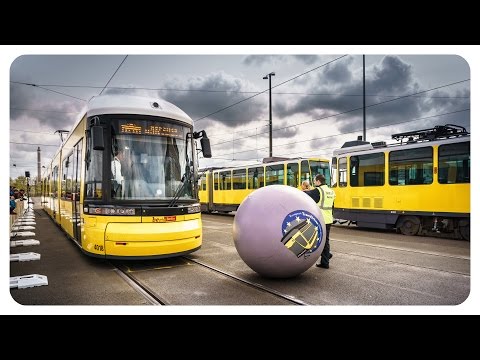