2 Towing a Ford Mustang Mach-E Could Cost You $28,000 for a Battery Replacement

5 Watch the Adventure of Tesla Model S in Video Games Between 2013 and 2021
Car video reviews:
Up Next

Kimi Räikkönen Returns to Racing, Set to Be Team Manager for MXGP Crew

In-vehicle gaming is a feature Tesla pioneered and also got bashed for in recent times. Now, the trend appears to catch traction with other carmakers too. Ford introduced an “escape room” style interactive game to the Ford Mustang Mach-E dashboard that could be the testbed for future aftermarket applications.
7 photos

There’s nothing wrong with killing time while charging an electric vehicle, so Tesla took the liberty of pimping up infotainment systems in its cars with games and other entertainment options. The feature proved popular with owners, who soon discovered they could even play while driving. This is the subject of an investigation for now, but we don’t see games disappearing from the car no matter what the outcome would be.

Ford is the latest carmaker that thought adding games to its EVs is a good idea. The first in line is the Mustang Mach-E, judging by the new gamification concept introduced by Ford of Europe. Dubbed “The Escape Car Experience,” the game is a spy-themed concept that takes players through a secret mission to deliver a package. It integrates with the vehicle’s hardware, like the electric seats, hands-free tailgate, air conditioning system, and headlight. These are either activated by the game or used by the player as a trigger at relevant points.

Only the heaters and the speakers are available to play with (hopefully by passengers only) when the car is in motion. And unlike the classic escape rooms, the players can exit the vehicle at any time, provided it is safe to do so. There's a catch, though: the game must be installed on an iOS device that interfaces with the vehicle through Apple CarPlay and “an internally developed piece of hardware and software.” Sorry, folks, no Android Auto for now.

We guess this comes down to the fact the infotainment system in the Ford Mustang Mach-E is just not powerful enough to allow a game to play, so it’s more like a game streaming from the phone or the tablet. Hopefully, a future iteration of Ford’s SYNC infotainment system will be more adept at playing games by featuring a dedicated SoC. Think the AMD Ryzen in Tesla vehicles.

The game is purely a working concept for now, but Ford wants to make it the foundation stone for a future app ecosystem that not only entertains but also educates drivers and passengers. This could be used to familiarize new owners with the features of their electric car, but also to assess and improve driving behavior. 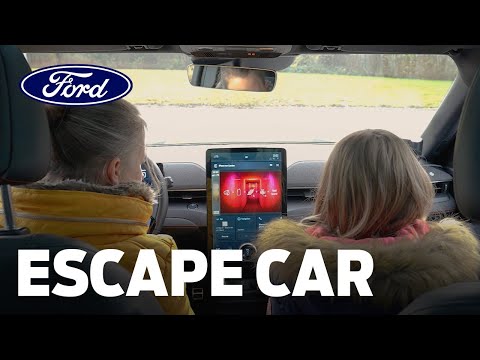