Ford's MyKey to Put a Leash on Driving Teenagers 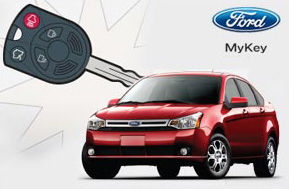 While rules are meant to be broken, American car giant Ford believes that enforcing restrictions on the teenage drivers is the required measure to increase safety and reduce the number of reckless accidents as the company yesterday announced the new MyKey technology. Debuting next year on the m y (model year) 2010 Focus coupe, this latest invention allows parents to enable some features and set precise limitations to improve the safety of young drivers (and the safety of others).

"We've upgraded an existing, proven technology – the SecuriLock passive anti-theft system – with some simple software upgrades to develop a new unique feature that we believe will resonate with customers," said Jim Buczkowski, director, Electrical and Electronic Systems Engineering – the same team that developed SYNC in partnership with Microsoft.

The MyKey, which will also be available for other Ford, Lincoln and Mercury models, offers features such as limited top speed of 80 mph, continuous traction control system that limits tire spin (cannot be deactivated), limited audio volume to 44 percent of total volume, a speed alert chime at 45, 55 or 65 mph, persistent Ford Beltminder with audio mute (the Beltminder chime continues at the regular interval and the audio system is muted until the safety belt is buckled; a message center display "Buckle Up to Unmute Radio" also appears on the instrument cluster), earlier low-fuel warning (rather than a warning at 50 miles to empty, MyKey provides a warning at 75 miles to empty) and the inability to deactivate the Park Aid and BLISTM (Blind Spot Information System) with Cross Traffic Alert systems.

Concerned parents will be able to configure the MyKey system through the vehicle message center, which, in turn, will update the SecuriLock passive anti-theft system. According the Ford's press release, “the system reads the transponder chip in the key and immediately identifies the MyKey code, which enables certain default driving modes”.

A survey conducted by a specialized company appointed by Ford shows that about 50 percent of those who would consider purchasing MyKey also said they would allow their children to use the family vehicle more often if it were equipped with the new technology. More than half of the surveyed parents worry that their teen-age children are driving at unsafe speeds, talking on hand-held cell phones or texting while driving, or otherwise driving distracted. More than a third of parents also are concerned that their teens do not always buckle their safety belts when driving.

While it's obvious that some features could prove useful, Ford doesn't say anything about passwords or other security measures that would prevent more technology savvy young drivers from reconfiguring the MyKey system and thus, get full control of the car. Wouldn't it just be easier to raise the minimum age bar teenagers are allowed to get their driving licenses?