5 Ford CEO Will Back EVs by Driving 1400HP Mustang Mach-E Up Goodwood Hill Climb
Car video reviews:
Up Next

Ford is on a roll lately, at least when it comes to electric vehicles. The Mustang Mach-E is selling like hotcakes, while orders on the F150 Lightning had to be frozen after the backlog already covers two and a half years of production at current estimates of 80,000 units a year. This glorious development made Ford CEO Jim Farley euphoric enough to start a long Twitter thread boasting about his company’s achievements and perspectives.

That was back in November. A month forward, Jim Farley has detailed Ford electrification plans in an interview with Bloomberg Markets and Finance. Only this time being in front of investors and bankers, he toned down his projections. As such, the earlier “600,000 BEV units annually within 24 months” are now more like “the rate, at least in December 2023, will be at 50,000 BEVs per month.”

This does not change the fact that Ford barely keeps up with EV demand, and Jim Farley addressed this in the interview. In the case of the Ford F-150 Lightning, this means doubling the production capacity from the projected 80,000 units a year in 2024. To cope with such an increase in production, Ford will have to invest in a bigger building at its Rouge Electric Vehicle Center. This would be a significant investment, in the hundreds of millions of dollars.

Mustang Mach-E production is also sold-out, and that is why Ford wants to triple its production targets by 2023 to over 200,000 units per year. To allow for that, Jim Farley earlier announced Ford will be postponing the production of electric variants of the Explorer and Lincoln Aviator by 18 months.

When you add these numbers plus the tens of thousands of units the E-Transit electric van sold in Europe and North America you see they only make for roughly 400,000 electric vehicles. Fortunately, the American carmaker has another EV venture in Europe to use Volkswagen’s MEB platform for at least one model. The first one out of this partnership will be a compact SUV expected to be launched in 2023, with production expected to reach 100,000 units per year.

Ramping up production will be the number one obstacle to Ford’s plans, and this pretty much depends on solving the supply chain problems. Jim Farley says the main constraint is to get enough batteries for all those electric vehicles. Ford tries to alleviate this by investing in three battery production facilities in Tennessee and Kentucky but it will take years before these will be online. 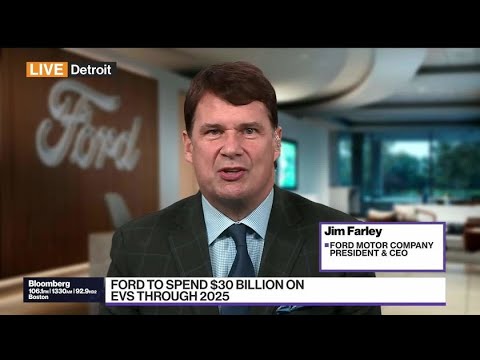