1 A Look Back at the Timeless BMW 3.0 CSL, the Forefather of All M-Badged Bimmers

Airbus A320 Chases Embraer 195 Off the Birmingham Runway, Happens All the Time

Some of the most epic sports cars of all time are homologation specials developed in the 1980s. During the era that spawned icons like the Lancia 037 Stradale, Audi Quattro, BMW M3, or Ferrari 288 GTO, Ford Europe put together a vicious little hot hatch that seemed destined for greatness.

Ford RS1700T: A Look Back at the Fantastic, Rally-Bred Homologation Special That Never Was

From the epic duels with Ferrari in endurance racing to dominating the world of rallying, Ford became a force to be reckoned with in a multitude of motorsport disciplines during the 1960s and 1970s.

After successfully campaigning the Mk1 and Mk2 Escort versions, the American manufacturer retired from rallying in 1979. Nevertheless, behind closed doors, the development of a brand-new car continued with a freshly-assembled works team.

With the introduction of a new set of regulations ready to kick into effect starting with the 1982 season, the official announcement that Ford was coming back to the World Rally Championship (WRC) came in May 1981. Along with the big news, the carmaker also showcased its new challenger, the Escort RS1700T.

Conceived for the famous Group B, the car was based on the new MK3 Escort introduced a year earlier. However, unlike the compact people mover, this version featured a high-performance race engine mounted longitudinally that sent 350 hp to the rear wheels. Even more impressive, 200 road-legal versions were set to be unleashed on public roads for homologation purposes.

Both rally cars and road-going specials were built around a heavily-modified Escort XR3 chassis. It came with MacPherson-style struts courtesy of German experts Bilstein, four-piston calipers that hugged vented discs, all fabricated by AP Racing, and it stood on Custom Ford M-Sport cast alloy wheels.

The bodywork resembled the stock Mk3 hatchback, yet it was beefed up with bespoke fiberglass panels that lowered weight, improved aero and made the car look more muscular. These included new bumpers, side sills, wheel arch extensions, a vented hood, and an adjustable rear spoiler.

Both a naturally aspirated and a turbocharged inline-four were tested during the development stage. The first was a 2.3-liter Hart 420R, while the second was a turbocharged 1.7-liter version of the iconic Cosworth BDA dubbed BDT. As you would expect from a 1980s racer, the turbo engine with dual overhead cams, four valves per cylinder and dry-sump lubrication made the cut. Moreover, a slightly detuned variant capable of a little over 200 hp has been scheduled to power the road-legal cars.

For optimum weight distribution, both versions of the RS1700T were equipped with a five-speed Hewland transaxle mated to an aluminum torque tube and a self-locking diff.

The initial target for the model’s debut was November 1982 but testing and further development determined Ford management to postpone the release to April 1983. By this time, Audi and its infamous Quattro were making it blatantly obvious that the future of rallying was four-wheel-driven.

With the assembly of homologation specials well underway at the Blue Oval’s Saarlouis plant in Germany, the entire RS1700T project was suddenly shelved by Ford’s newly-appointed Director of European Motorsport, Stuart Turner who reasoned that the car wouldn’t be good enough to win the group B. Instead, the BDT engines and some of the tech from the project were used to develop the mid-engine, 4WD RS200.

Up until that point, the company managed to build 18 prototypes, four of which were road-legal versions. Many of them were shipped to South Africa, where lenient rules allowed them to compete as works entries. This enabled engineers to test the BDT engine before the RS200 chassis was completed. Eventually, most of the cars were destroyed with only a handful reportedly surviving to this day.

This year, the Goodwood Festival of Speed hosted one of these survivors. It treated the crowd to several high-speed demo laps which you can enjoy in the video below posted on YouTube by 19Bozzy92.

Although we can’t help but agree with Ford’s decision when it comes to the WRC's Group B where Lancia and Audi would have been tough to beat with the RS1700T, it’s a shame that the carmaker didn’t go ahead with the release of the street version which could have been an awesome rival for the BMW M3. Weighing under 1,984 pounds (900 kg) and powered by a vicious Cosworth engine, it would have definitely become a 1980s legend. 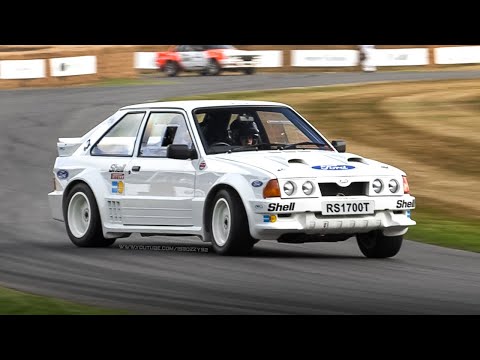