It’s time to get your ugly Christmas sweaters, themed PJs, assorted socks and knitted headgear out of storage, because the clock is ticking on the biggest, most festive and jolliest holiday of the year.
7 photos

For several years, the carmaker has been running the Share the Road campaign, which aims to raise awareness on the many issues plaguing – and endangering – traffic participants who don’t ride on four wheels. Those would primarily be cyclists and scooter riders, many of whom are faced with even more difficulties now that the days are shorter and there are longer periods of darkness.

Ford has invented a new type of ugly Christmas sweater, “one that you’ll actually want to be seen in. In fact, that’s the whole point.”

It’s ugly, make no doubt about it, but it’s also useful in terms of making the wearer more visible. The Safe Distance Christmas Jumper has small projectors in the front and back (hidden in the nose and tail of the reindeer) and laterally (in the reindeer’s antlers), which create a 1.5-meter (4.9-foot) “safe zone” in the shape of a Christmas tree.

This informs motorists of the correct distance for overtaking, which is one of cyclists’ biggest gripes when riding outside of dedicated bike paths. However, Ford says you can also wear the jumper when not riding, to enforce social distancing whenever you’re out. As long as you have no shame in rocking in the ugliest Christmas sweater on a four-block radius, that is.

“In 2020, we may have become good at keeping a safe distance in shops or on the pavements but we’re not always so good at it on the roads,” Emmanuel Lubrani, Share The Road, Ford of Europe, says in a statement. “The Safe Distance Christmas Jumper may be fun, but the message is serious; we all need to be mindful of other road-users and make sure everyone gets home for Christmas, no matter what form of transport they take.”

The bad thing about this Ford ugly sweater for cyclists is that it’s just a prototype. For the time being, at least. Not gonna lie... 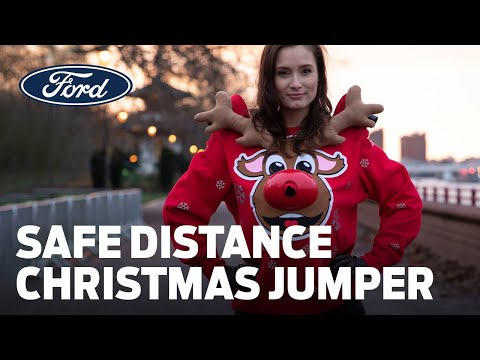