3 2022 Ford Bronco White Top Confirmed, Black Version Cause for Yet Another Delay

5 “Big Oly,” Probably the Most Notorious Classic Ford Bronco, Comes Up for Sale
Car video reviews:
Up Next

When Ford crashed Jeep’s traditional Easter Safari party in Moab, Utah, it brought to our attention a total of five deeply customized Broncos (there’s a lonely Bronco Sport in there to keep company to the 4-Doors). The company announced three new partnerships with renowned aftermarket specialists: RTR, ARB, and 4 Wheel.
59 photos

In addition to those, the Blue Oval didn’t miss the opportunity also to showcase its own take for the Bronco customization scene, a 4-Door 2021 Outer Banks example prepared by none other than Ford Performance. Naturally, it’s also the first one to get the walkaround treatment from the Bronco Nation channel on YouTube.

It comes as no surprise that RTR, ARB, or 4 Wheel didn’t get the chance to shine first. After all, although labeled by the Blue Oval as an “independent online community,” it's obvious that unlike other endeavors, The Bronco Nation carries the company’s direct seal of approval. As such, we could even consider these features as official material, and don’t worry—the other Broncos will get the same treatment soon.

First up on the roster, the Ford Performance 4-Door Outer Banks showcases the possibilities to personalize the Bronco from the factory, and we can tell you this isn’t one of those walkarounds that come to an abrupt and quick end. Instead, we’re allowed to see both the exterior and interior for minutes on end, making sure everything is neatly explained.

As for our take, we consider the rear boot view sporting a neat cargo arrangement (from the 4:15 mark), the look at the much-discussed Bestop fastback soft top, and the extensive interior depiction (including the rear bench from 16:15) as the highlights.

Now, all we have to do is wait for the other custom Broncos to share their secrets; so far, the online community seems to favor the 4 Wheel Parts model the most, while our personal favorite is the RTR creation. Which is also why we’ve embedded RTR Vehicles’ own presentation video as well at the bottom of the page for everyone to enjoy. 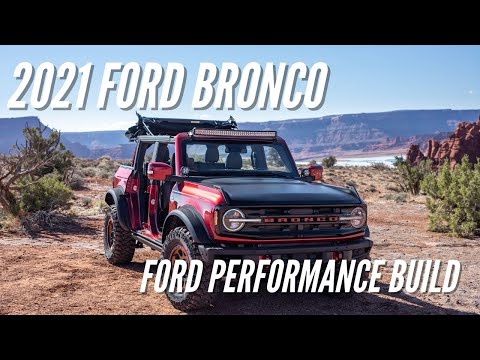