1 Towing a Ford Mustang Mach-E Could Cost You $28,000 for a Battery Replacement

We’ve had Tesla cars on the road for many years now, so most people know what to expect in terms of reliability. Now it’s the time to turn our attention to other EVs on the market, and the Ford Mustang Mach-E seems like the most interesting to look into.
9 photos

Electric vehicles are nothing like the ICE when it comes to reliability, and this comes down to having a Li-Ion battery onboard. Well, even though we know the battery in an electric vehicle is a lot better than the one in a regular mobile phone or laptop, a lot of folks are not aware of that. This is the main reason people are curious to see how an EV stands the test of time. And thanks to a video shared online by Alex Dykes, we now know how well the battery on a Ford Mustang Mach-E performs after one year.

We’ve seen these reports before, but most of them were about the Tesla Model S or the Model 3, which are for a longer time on the market. The Ford Mustang Mach-E, on the other hand, only started deliveries in December 2020. This is not long enough for us to assess its reliability or battery performance, but it’s still interesting to see how is going after one year of ownership.

Alex got his Mustang Mach-E Premium Extended Range AWD one year ago and covered about 10,000 miles (16,100 km) since then. He wanted to share the pros and cons of owning a Ford Mustang Mach-E for a year, before handing it to its next owner. The experience was mostly positive, with very few complaints about the electric Mustang.

One of them points to the 225 all-season tires fitted as standard on the car. Alex says they are too narrow, compromising stability and braking distance. This is why he immediately replaced them with the bigger 245 Pirelli P-Zero, similar to the ones fitted to the Mustang Mach-E GT. The bigger tires had a minimal impact on the vehicle’s range, which dropped by about 10 miles (16 km).

Speaking of which, Alex tells us that time did not affect the battery endurance. The 88-kWh battery pack is EPA-rated for 270 miles (435 km) and a test Alex did when the car was new showed a real-life range of 275 miles (443 km). This dropped to 265 miles (426 km) after changing the tires and it's still at 264 miles (425 km) now, almost 10,000 miles and one year later. A one-mile loss is negligible, but the Much-E is still too new on the market to see how this will scale after a longer time.

One thing that Alex is not very happy about is how well the battery behaves in cold weather. During a trip at 30 degrees Fahrenheit (-1 Celsius) with the cabin heating on, the Mustang Mach-E used 80% of the battery to cover 150 miles (241 km). This big penalty comes from the fact that the Mustang Mach-E does not feature a heat pump, but a power-hungry coil heater. Of course, there are more interesting things in the video below, so let Alex tell the whole story. 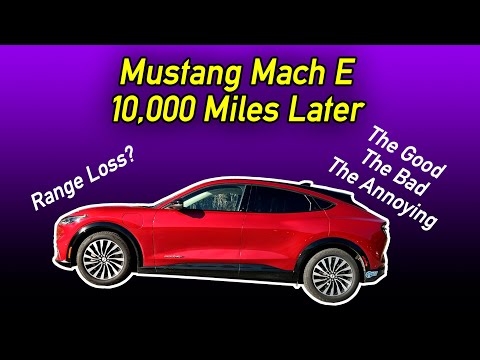