It may not be the best-handling vehicle out there, nor the most powerful ‘Stang in Ford’s stable, but the Mustang Mach 1 was nonetheless subjected to a fast lap of the Nurburgring Nordschleife, with Michelin Pilot Sport 4 S tires on its feet.
8 photos

With Sport Auto’s Christian Gebhardt sitting in the driver’s seat, the Ford Mustang Mach 1 posted a very impressive lap time. At the end of the breathtaking run, the stopwatch revealed 7 minutes and 58.29 seconds, which places it in the same zone as the BMW M2, Porsche Boxster S 981, and B7 generation of the Audi RS 4, FastestLaps reveals.

To better put this number into perspective, we will remind you that a U.S.-spec variant of the Bugatti EB 110 SS posted an unofficial 8 minutes and 1 second. In fact, these are all unofficial lap time, and are therefore unrecognized by automakers, who go above and beyond during their official runs that take place in perfect weather conditions, with extremely skilled drivers at the helm.

Sitting under the Mustang Shelby GT500 in Ford’s family in terms of pricing, the Mustang Mach 1 starts at $53,400 in the United States, excluding the destination charge, and goes up to at least $55,300 for the Mach 1 Premium. It sports Brembo brakes with large rotors, independent rear suspension, launch control, MagneRide dampers, and a few other features. Power comes from the 5.0-liter V8, which is good for 480 horsepower, around 30 hp more than its European counterpart. 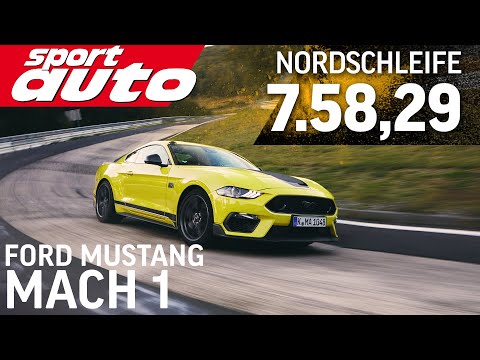