1 Drifting Error 404: Ford Mustang Gets Stranded on the Median

2 Florida Man Has One Too Many Drinks, Drives Mustang up Power Pole, Says "Yeah, It Sucks"

The tail-happy nature of the sixth-generation Ford Mustang has made yet another victim, a GT350R by the looks of it.
13 photos

Filmed not long ago, presumably, and with the video making its way online earlier this month, the vehicle in question was allegedly leaving a car meet, when the predictable happened.

The clip embedded at the bottom of the page starts by showing a black Mustang, supposedly the normal V8-powered GT, making a left turn onto the main road. Shortly after, the GT350R follows it, with the driver feeling the need to show off. As a result, he pinned the throttle to the floor, and the car’s tail started shaking.

Next up, it did a 180-degree turn, subsequent to the driver hitting the brakes, biting into the curb, and slamming that pretty rear end into a pole. The crash not only sounded expensive, but it also was, as we reckon that the car suffered damages to its suspension, brakes, tires, and wheels. Moreover, since it had a close encounter of the third kind with the aforementioned pole, it will likely need to pay a visit to the plastic surgeon, too.

With a piece of the rear bumper barely hanging on, the vehicle left the grass for tarmac, pulling up in the parking lot of a nearby motel, probably for the person driving it to assess the damages. And they are pricey, as we already mentioned. Add a massive blow to the driver’s ego to the list too, as we are almost certain that they will think twice before abusing the throttle of their otherwise exciting muscle car in the future.

Before wrapping it up, we’ve got to tell you that if you have a thing for seeing Mustangs crashing (for whatever reason), then you should check out our dedicated category here, after watching the video shared down below, of course. 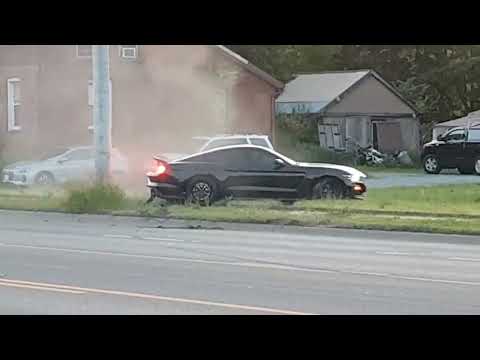