Whereas the Mustang feels right at home in a drag race, you're much less likely to find a model made by Genesis lining up at the start of a quarter mile race. Well, that might be about to change.
9 photos

Are we saying the South Korean sedan is something of a drag strip monster that should have the McLaren 765LTs and Tesla Model S Plaid owners worried? It would be fun if we did because it would give you the perfect opportunity to phone in at the loonies and ask them to come pick us up, but we haven't lost it yet.

However, as you're about to see, given all aspects of the race - from the weather to its much more famous opponent - the show it puts on is genuinely impressive. So, what does the G70 hide in that engine bay? Lifting the hood will reveal a turbocharged 3.3-liter V6 engine good for 365 hp and 376 lb-ft (510 Nm), mated to an eight-speed automatic transmission that sends all power to the rear wheels. A sporty enough setup, but one that might pose some problems on an Australian winter's day.

No matter, because its rival doesn't have an advantage in the sense of traction either. Well, it gets slightly upgraded tires (Michelin Pilot Sport 4 S as opposed to plain Pilot Sport 4), but we all know how fussy these high-spec Michelins can get if you don't warm them up properly and doing that in those conditions could prove nearly impossible.

As far as specs are concerned, the Mustang sits clearly ahead on all accounts. It gets the well-known 5.0-liter V8 engine putting out 455 hp and 410 lb-ft (556 Nm) of maximum torque, all going through a ten-speed transmission to the same rear axle. It's got more of everything, even if not by a huge margin. Well, apart from presence - that one it's got in abundance, as made perfectly clear by the soundcheck.

Once the races start, though, the on-paper gap between the two loses any significance, and we witness the Genesis G70 take the win in the first race. However, considering the Ford Mustang driver missed the last gear shift, they decide to run it again and, even though it's really close for most of the distance, the Mustang's extra power shines through in the end.

With the vehicles in comfort mode and with all electronic helpers on, the result is a lot different. Both vehicles take forever to react, but once they get going, it's the Genesis that's more efficient in putting the power down. Maybe it's that low-end torque from the turbocharger that gives it an early boost, but in this case, it proves to be decisive. The Mustang tries to catch it as it did before, but it fails to do it in time.

That means the rolling race becomes the decider between these two, and even though the Mustang is the clear favorite, you can never be too certain. After all, it was the favorite in all the other races as well, and it still lost one and barely won the other. Give the clip a watch to see which one snatches the overall win. 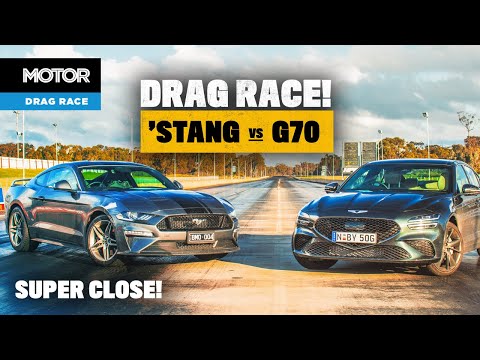