Ford Mustang and Jeep SRT8 Seek America vs. Import Glory, It's Not a Close Call

Home > News > U-turn
Aurel Niculescu
As far as eclectic drag racing battles go, this one is taking the "let’s check as many body styles as possible" approach. That’s because we’re dealing with an SUV, a couple of sedans, as well as a two-door coupe.
16 photos

And one clearly needs to mention the door count nowadays, because just calling a vehicle a “coupe” isn’t enough anymore. Also, it’s another classic instance of America vs. Import in case anyone didn’t notice that from the attached gallery. All in the search of tarmac glory, late at night.

On occasion, that is making it hard for us to distinguish the make and model of the contenders. Such is the case with the light blue Audi, but let’s not get ahead of ourselves and stick to the facts in chronological order.

Seeing a hulking SUV on the drag strip isn’t exactly out of the ordinary, so this Jeep Grand Cherokee SRT8 lining up for the first race presented by the Drag Racing and Car Stuff channel on YouTube isn’t really striking a false note with us.

It’s also cause for the first America vs. Import brawl, as the racer next to it comes from Germany; it's a BMW 3 Series (possibly a 340i, according to the provided description). The first skirmish goes towards the nimbler sedan, so the SRT8 driver calls for a rematch, thinking it could do better during a second run.

Even though, on both occasions, the Jeep is quicker off the line, the Bavarian does much better in the long run, so it ends up posting a couple of 11-second results against the low 12s of the Grand Cherokee.

Probably thinking it could do better, the Ford Mustang GT comes rumbling like a knight in white and shiny armor to fight off the BMW, but their run settles the case for the import division as the 3-Series posts another great result – 11.20s against the pony’s 11.63s attempt.

America’s honorable mention comes in the form of the Jeep taking up an Audi (possibly and RS4) for the challenge, and the Grand Cherokee finally scores a win with a flawless 12-second result at 113.35 mph (182.41 kph). 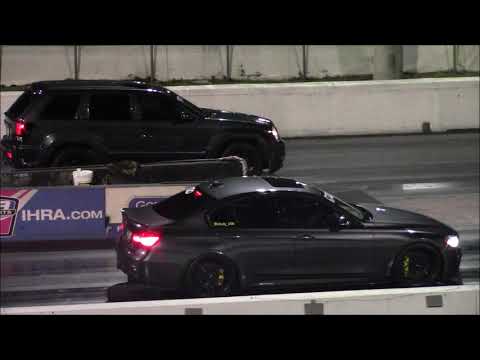