4 2022 Ford Evos Crossover Wagon Gets Detailed Inside and Out

5 2022 Ford Evos Won't Replace Fusion in the U.S, Mondeo in Europe
Up Next

Cristian Gnaticov
In its never-ending chase for the booming segments, Ford has slowly ditched nearly all passenger cars from its U.S. offering. Save for the Mustang and GT, their lineup includes only crossovers, SUVs, trucks, electric, and commercial vehicles.
6 photos

Potential customers have eventually learned to live with the brand’s decision of phasing off sedans, and with no replacements whatsoever planned, they were forced to check out what the competition has to offer instead.

Surprisingly, companies such as Volkswagen, Mazda, Kia, Nissan, Toyota, Honda, and so on still have such models in their portfolios. And if they can make them profitable, then why can’t Ford? This subject was already debated numerous times a few years ago, so we won’t delve into it, as instead, we will remind you that one of the cars that was dropped altogether was the Fusion.

Known as the Mondeo overseas, it lives on for a new generation in China. It retains its moniker, was officially unveiled in mid-January, and as you already know, it is aimed solely at the People’s Republic. Thus, it won’t be offered in Europe either, where it would’ve taken on the likes of the Volkswagen Passat, Skoda Superb, Mazda6, and Opel/Vauxhall Insignia.

The all-new Mondeo looks like an evolution of its predecessor. It incorporates the Dearborn marque’s latest design language, and sports a slightly bigger footprint. Rumor has it that it shares its underpinnings with the Asian country’s Evos and Lincoln Zephyr. Deliveries will kick off later this year, with the model being assembled by Changan Ford.

Now, while the Blue Oval has unveiled the sedan version of the new Mondeo, the internet has already had its way with it, turning it into a wagon. We’ve already seen it a couple of weeks ago, yet in this writer’s opinion, it looks even better in the latest renderings, signed by Theottle.

The car retains its design all the way up to the C pillars, as further back, it has a longer roof, complete with rails, and bigger quarter windows. At the opposite end, the pixel manipulator has given it a tailgate, which no longer sports the ‘Mondeo’ lettering between the taillights, but the corporate logo.

If you look further down, you will see that the rear bumper has a much cleaner design. The reflectors, exhaust trim, and diffuser carry over, and speaking of things that soldier on from the real Mondeo, these also include the alloys, flush-mounted door handles, shark fin antenna, and grey paint finish.

The cockpit would be identical too, though we don’t exactly know how it looks like in the sedan either, as Ford has not released any pics of it at the time of writing. Still, if the latest rumors prove to be airtight, then it will feature the same dashboard panel as the Evos, perhaps with the ginormous 43-inch panel that combines the 27-inch touchscreen infotainment system with the 12.3-inch digital dials. Moreover, like the Zephyr, it should have a Level 2+ semi-autonomous driving system as well.

Details surrounding the powertrain are inexistent, yet it could make use of the 2.0-liter four-cylinder engine found in the Evos, perhaps married to an eight-speed automatic transmission.

So, it is crystal clear that Ford has absolutely no intention of giving the Fusion/Mondeo another shot in North America/Europe, but if they did, would you want it to look like the one sold in China? Also, while we’re at it, should they launch an estate variant of the car too? We’d definitely say yes to both questions, and in our fantasy, it would be accompanied by both ST and RS versions, with the latter sporting the Mustang’s V8, and an all-wheel drive system. 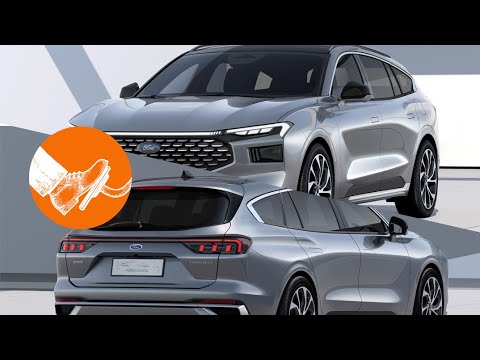