4 Ford Bronco Production Will Reportedly Kick Off on March 22, 2021

Ford Kuga Hybrid Can Also Be Had With AWD, Promises Over 620 Miles of Range

The Blue Oval company is leaving no powertrain stone unturned for its compact SUV offering, with the Kuga (Escape in the United States) premiering its “self-charging, full hybrid” option for the Old Continent. It’s already in production at the company’s Valencia, Spain, manufacturing facility and joins the series alongside the classic gasoline and diesel options, as well as the EcoBlue Hybrid and Plug-In Hybrid electrified derivatives.
8 photos

Well, the green options for the Kuga are starting to sound a bit confusing – so let us explain them from the get-go. The EcoBlue Hybrid is the 48-volt mild hybrid option, while the Kuga PHEV is the one with cable-recharging capabilities and all those recall issues.

Ford clearly felt there was room for more, and is taking a page out of Toyota’s hybrid book with this new release of the Kuga taking on a powertrain that doesn’t need to be plugged in. Hopefully, the smaller 1.1 kWh battery is not going to be as much trouble for the U.S. company as the larger pack from the PHEV.

Anyways, Ford now has a complete powertrain family for the Kuga, with gasoline, diesel, MHEV, full hybrid (HEV), and PHEV options. All that is left would be a fully electric derivative, but we can rule that one out on account of the Mustang Mach-E.

The electrified Kuga family represents just three out of 17 green options coming from the company by the end of next year. For now, we have just the details for the Kuga Hybrid, which hides underneath the hood and in other parts of the body the full hybrid powertrain made out of a 2.5-liter Atkinson-cycle ICE, an electric motor, and the puny 1.1-kWh battery pack capable of providing assistance for “pure-electric” driving.

There’s no user input needed, as the “Kuga Hybrid automatically switches seamlessly between power configurations according to the driving scenario” in order to achieve the reported 1,000 km (621 miles) of combined range. The average fuel economy of the Kuga Hybrid is of 5.4 l/100 km, according to the WLTP standard.

More importantly, the Kuga Hybrid is the first electrified model in the series that retains its all-rounder capabilities, as the company is also offering the SUV with its proprietary Intelligent All-Wheel Drive tech. 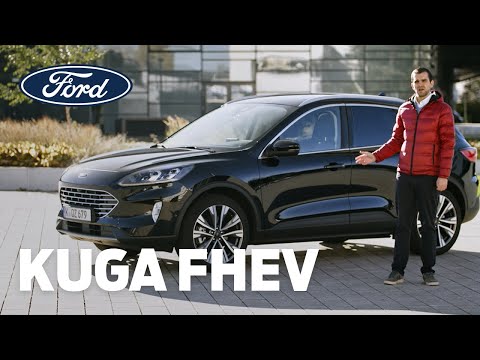