Dragos Chitulescu
Horsepower figures are often marketing tools for companies, and not necessarily an accurate way of describing how fast a car can go. Because you may have as much power as a Ferrari 458, but what about weight figures? What about aerodynamics? What about transmission efficiency? And I could keep on asking these questions all day long.
14 photos

It's not uncommon for people in some areas of motorsport to also brag about horsepower levels. I've seen this happening in drifting quite often, where cars would be advertised as having over 1,000 horsepower, while the setups used during the races would only provide about 75% of that power. But still, you better count on the fact that a race car with any given amount of power is going to be faster than a street-going vehicle that makes the same numbers.

Because once again, there are more aspects to consider when comparing two vehicles. So going into this video, as much as I like the new Ford GT, I honestly didn't think it stood a chance going up against Travis Pastrana's Subaru STI. Just by looking at the spec sheets for both cars, it's impossible to come up with an argument to support the Ford GT in this race.

Sure, the GT comes with a 3.5-liter V6 unit, which means it has more cylinders and more displacement than the Subaru does. But the maximum output of the supercar is 647 horsepower, while the Gymkhana machine has been tuned to 862 horsepower. The 7-speed dual-clutch automatic gearbox of the Ford is no slouch if you compare it to any other road-going vehicle, but the STI is equipped with a 6-speed sequential, and that's hard to compete with.

To make things even worse for the Ford GT driver, all of that power is being sent to the rear wheels, while the STI has AWD to play with, which means that it's going to be infinitely faster off the line. To top it all off, the Ford GT is almost 700 lbs (317 kg) heavier than its opponent, so the only way it's going to cross the finish line in 1st place is if the Subaru will suffer some kind of malfunction along the way.

Going into the race, everyone that's around for the event seems to be betting on the Subaru as well. The format is the same as in all the previous challenges, with a 1,000 ft (304 meters) stretch of tarmac ahead. The Subaru is so fast off the line that it's not even funny, as the Ford GT looks like an ordinary grocery-getter by comparison. To make things even more spectacular, there's a ramp installed at the end of the run, and the Subaru wins by a flying finish.

In an attempt to even out the odds, for the second run they opt for a rolling race format, so that the Subaru won't have the AWD advantage any longer. This time the Ford GT doesn't look as bad as it did on the first run, but Travis Pastrana does score another flying win in the STI, by several car lengths ahead of his opponent. For the third run, the Ford GT starts first, but even so, it's still no match for the race car. I guess they should just bring out a more worthy opponent next time, instead of playing around with cars that don't stand a chance. 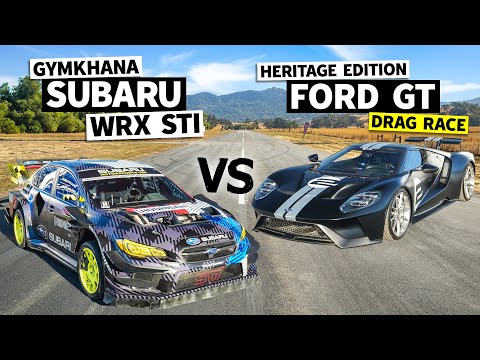