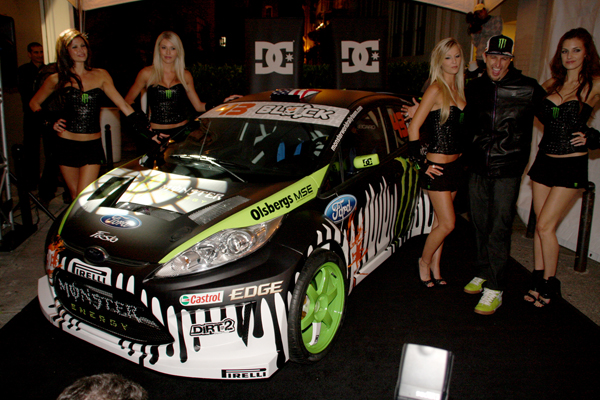 Ford has managed to claim an ultra-high spot in the top of companies that develop complex Internet-based marketing schemes. The company’s most notable web campaigns were the ones for the Fiesta sub-compact and for the Explorer SUV, with both using a long list of on-line interactions with users and generating tons of free publicity.

But Ford has also been present on the Internet through other, exterior, pathways. One of this is the collaboration with Ken Block, the owner of DC Shoes, who likes to play around with rally cars, officially and unofficially.

The maker of the Gymkhana videos developed a tie-up with the rallying Ford Fiesta last year. It seems that now the sub-compact will get a special edition dedicated to Block.

During a recent radio interview with KROQ, Block was asked if Ford was working on a Fiesta KB edition. As you could’ve imagined, he choose to avoid the “yes” and “no” answers, saying that the two sides are currently considering that as an option.

Block also said that he has chosen a career pathway for the near-term future, explaining that he wants to focus on motorsport and contribute to the development of new racing cars.

Ken Block’s image fits perfectly with the Fiesta’s one, so the move would make sense. In other words, we expect that if Ford decides to build a Fiesta KB edition, this will become a commercial success.

For the complete Ken Block interview, you can browse the KROQ website.