4 Reuss: Cruze Will Lead the Way for Chevy in Small-Displacement

5 GM Ramps Up Production at Two US Plants
Car video reviews:
Up Next

Ford F-150 Loses Yet Another EV Tug of War, This Time Against Lordstown Pickup

Pickup manufacturers like to use a tug of war contest to demonstrate their vehicle's abilities because it's a very graphic way to show which of the two has the most pulling power. And with pickups, pulling power counts.
5 photos

With the Ford F-150 currently being the segment's benchmark vehicle, it's only natural for all electric newcomers to try and gun for the top spot if they think they can. And they have everything going for them: battery-powered trucks are heavier, meaning the Ford has more weight to pull; they have more torque and it's all available at the push of the pedal; traction is a lot easier to manage and a lot quicker to respond, so wheelspin can all but be eliminated.

That last point is even more appliable to the Lordstown Endurance than to any other EV because this particular American electric truck uses four in-wheel hub motors. That eliminates a lot of moving parts and makes the response virtually instant.

All that considered, you would expect the Ford (a 2019 F-150 Lariat EcoBoost in this case, set in 4WD low range and with the traction control switched off) to lose the contest, and the internal combustion truck duly obliges. However, even though we don't doubt the Lordstown Endurance ability to win this tug of war, we do feel like pointing out a few things.

We'll start with the obvious ones. First off, the strap isn't attached to the center of the vehicle on Ford's end but is on the Endurance. That means the F-150 will tend to rotate thus losing traction and power. Speaking of traction, the driver in the Ford doesn't do the pickup any justice either by flooring the accelerator pedal and causing the wheels to spin.

However, the most important slip-up that makes the trial irrelevant is the very, very late response from the F-150 driver. By the time the wheels start spinning, it has already been pulled back two feet, meaning it not only had to fight with the torque of the Lordstown Endurance, but also its momentum. No truck in this world could have come back from there.

Then there's the stuff we can't know for sure. For instance, it definitely looks as though the electric truck has a pair of tires that's more suited to the occasion compared to the Ford's street rubber. However, since there's no mention of this aspect - despite its vital role - we can only guess.

And, speaking of tires, why have the tug of war on the grass at all? If tug of war is all about pulling power, why not eliminate all the other variables such as grip to the best of your abilities? Oh, if you also want to showcase the vehicle's 4WD system, then using identical tires is a must. As it is, it's just a publicity stunt that only raises more questions than it answers. 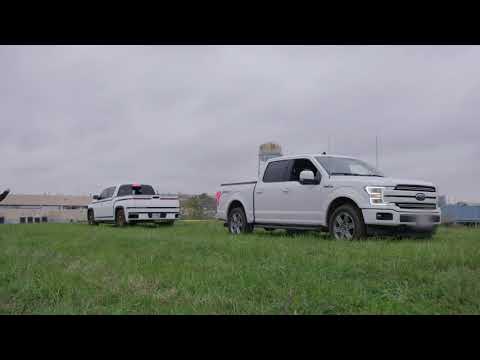