Considerably more expensive for the 2023 model year, the F-150 Lightning electric half-ton pickup truck still is pretty good value for the money. The featured clip has two of them, namely a work-oriented Pro trim level with the standard battery and a Lariat with the extended-range battery. Care to guess which of them is quicker in the quarter mile?
11 photos

The Fast Lane’s crew is much obliged to answer that question with a good ol’ drag race, which starts with a slightly better launch for the Pro. The white-painted truck pips the win, recording 13.2 seconds at 106.2 miles per hour (170.9 kilometers per hour). Truth be told, the Lariat could’ve done better had it been fitted with the stock tires rather than all-terrain rubber.

To be more specific, The Fast Lane previously ran 13.07 seconds in the blue truck with the factory-issue tires. Be that as it may, the Pro won this race, making it worthy of taking on the Rivian R1T. Gifted with four instead of two electric motors, the tweener truck makes easy work of the Lightning.

With Tommy Mica and his cookie behind the wheel, the Rivian blasted over the finish line in a slightly ridiculous 11.89 seconds at 112.1 miles per hour (180.4 kilometers per hour). That’s really impressive for a vehicle this heavy, more so if you remember that Rivian is a much young automaker with less research & development money than the Ford Motor Company.

On the other hand, we should remember how large of a pricing difference there is between these pickups. In any case, the final showdown is fought between the R1T and a vehicle that nobody saw coming. Rather than reviving Hummer as a standalone brand, Hummer has been reimagined as a truck and a truck-based utility vehicle for General Motors’ GMC brand.

Currently the most powerful electric pickup on sale in the United States, the GMC Hummer EV makes 1,000 horsepower and 11,500 pound-foot (make that 15,592 Nm). The quoted peak torque, however, is wishful thinking because General Motors is referring to the combined total torque applied to the wheels rather than the output shafts of the Hummer EV’s three motors.

According to chief engineer Al Oppenheiser, each motor develops anything between 380 and 400 pound-foot (515 and 542 Nm). Despite its deceitful torque rating, the Hummer EV didn’t stand a chance against the lighter R1T, only managing to eke out 12.23 clicks at 106.4 miles per hour (171.2 kph). 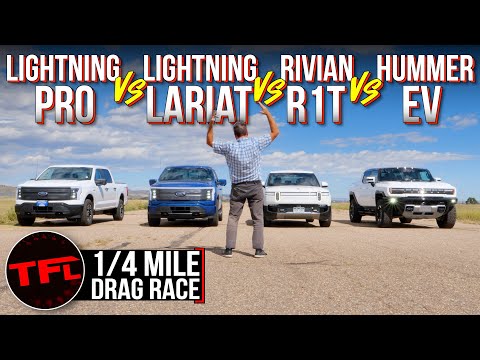