3 The Donk: Putting Huge Wheels on a Car

The Ford Crown Victoria is one of the most recognizable shapes of the 21st century American automotive landscape. Old blockbusters have probably blown up hundreds of them as taxis or police cars.
8 photos

They say that the worst used car to buy as a teenager is an ex-cop car, but somehow, the Crown Vic has created an air of nostalgia around itself. And it's not uncommon for internet entertainers to get these tough old things just to beat on them some more.

YouTube artist/car designer TheSketchMonkey doesn't want to park a cop car next to his clean Tesla. So instead, he tries to show the old sedan some respect by giving it a modern makeover. That's right, it's one of those modernization renderings where we pretend like production never stopped.

But it did, back on September 15, 2011. At that point, this particular model had been in production for over a decade and could still trace its roots to the 1980s thanks to the Panther platform, shared with the Lincoln Town Car and the Grand Marquis.

The tech was so old-fashioned that from 1997 right until the end of production, these three Panther-based cars were the only ones sold in North America with a full-length frame, RWD, and a standard V8. That's basically pickup construction, and it ensured those Police Interceptors could take a serious pounding.

Cool? Yes, but definitely not modern. So we were curious how a Crown Victoria would look after receiving the digital makeover. As usual, this requires the elements that link the car to its era to be changed, things like the trim, the wheels, door handles, or taillights. Also, the proportions are a little off, but you can't modify them too hard. Otherwise, it stops having that 1990s feel.

The artist decides to paint in most of these features manually, making the modernized Ford appear crisper. It's a bit like how they shave bumpers on muscle cars, but done in Photoshop and with regular plastic trim. Also, flush-fitting door handles and carbon fiber aero elements are included in the revision. If anything, you should check out the rendering to see how a Crown Victoria would look with a body kit. 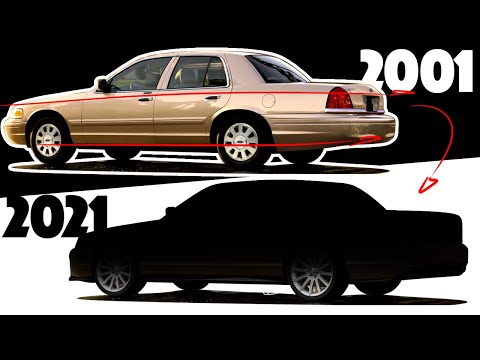