4 Ford's Making a Robot That Can Fly and Drive Itself, Not Without Cost Control

Ford has announced it has successfully completed an 18-month trial of a new "cobot," which is called Robbie. After the completion of the trial, the cobot has become a permanent member of the staff in the factory where it was tested, and it might be implemented in other facilities.
6 photos

The Blue Oval introduced "cobots," which are a term to define collaborative robots, to help humans complete tasks in factories. The idea is that the cobots alone could not replace humans, and the strain put on the human body is greatly reduced when cobots are deployed.

One of the employees who is assisted by Robbie is Dietmar Brauner, who you can see in the photo gallery and in the video that is embedded below. Brauner has a 30-year career behind him, and he thought that it was going to be over sooner than he anticipated after he had recurring health issues.

As Ford noted, the employee suffered from reduced mobility in one of his shoulders, as well as in the wrist of the same part of his body. With the help of Robbie, Dietmar can do his job without picking things up, as well as cutting the need to hold parts in position as he tightens screws.

To be specific, Dietmar's job involves installing certain parts on engines, and then securing those elements on the engines. Instead of having to pick up the parts, position them, hold them in place, and then screw them in position, the employee can just place them in the robot's "arms," and then Robbie will move the parts to their correct placement, where they will be held with zero effort on Dietmar's part.

Just imagine having someone strong holding parts while you secure them in place. Dietmar uses an electric screwdriver to handle the latter part of the job, and the result has changed the employee's life.

As he explained, "it has changed everything." Dietmar also noted that he hopes this new technology will open the door for others to get the chance to do this kind of work, or to continue their careers in the field. 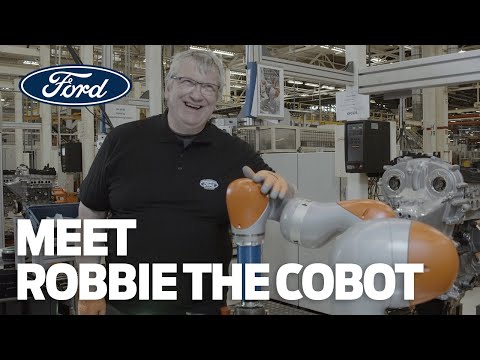