5 2021 Ford Bronco Sport Has a Full Day With Dogs, Target and Chick-fil-A Visits
Car video reviews:
Up Next

The Blue Oval first teased the heavily camouflaged 2022 Bronco Warthog back in September with a jumping prototype shot. Its protective layer hasn’t come off since, but we do have more interesting aspects to discuss, based on the latest spy video footage that was captured around Dearborn.
25 photos

While the 2021 Bronco is still months away from its first deliveries, and the fan community is still coping with the sad news that reservation holders will have to wait until summer next year, Ford is hard at work with the development phase of the high-performance iteration.

Thus, it’s not hard to imagine that Ford’s 2022 Warthog will get spotted more often from now on – we recently saw it being measured for size against both a Ford Explorer and a famous Detroit landmark - the Uniroyal Giant Tire.

Now, courtesy of the bronco6g.com forum’s YouTube channel, there’s also a compilation of Warthog prototype footage as the off-road machine takes to the streets of Dearborn, Michigan, for what looks like relaxed cruising.

That’s judging from the very subtle hints of exhaust soundtrack, as well as the urban speeds that were perfect for capturing some neat passes and close-ups.

As far as the prototypes are concerned, we noticed the shiny black top, along with details of the suspension setup that will probably put the Warthog in the same league as the F-150 Raptor when it comes to rock-crawling abilities.

Now, for the possible Easter Eggs, check out the silver-looking 2021 Bronco appearing from the other direction at the 0:57 mark. As far as we can tell, it sports that decidedly unattractive front license plate holder we saw recently (perhaps it’s the same prototype).

Then, from the 1:35 mark, the Warthog is accompanying a custom Jeep Wrangler, and they both look very wide when cruising together. Is this a casual encounter, or has Ford decided to bring interesting projects to benchmark against their upcoming high-performance vehicle?! 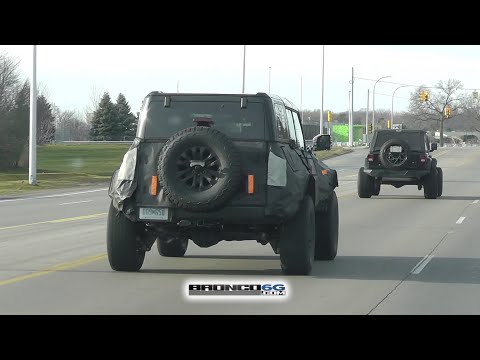