2 Volkswagen VR6: The Odd, Yet Brilliant Member of the Legendary Six-Cylinder Club

3 A Comprehensive Look at the Legendary Toyota 2JZ Engine

Introduced twenty years ago, the Barra was an engine range developed by Ford Australia. Although it included a V8, the moniker was made famous by the inline-six and its insane power potential.

Named after the Barramundi (Asian sea bass), a species of fish known for being opportunistic predators, this engine was the culmination of over four decades of straight-six development by the Blue Oval’s Australian branch.

Donning twin overhead cams housed in a beefy aluminum-alloy head, with four valves per cylinder and variable cam timing, it wasn’t particularly innovative. Moreover, the head was mated to an old-school cast-iron block that made the 4.0-liter unit big and heavy, especially for a 21st-century motor.

It was conceived with bombproof reliability and adequate fuel consumption in mind, so the performance figures of the entry-level variants were nothing to get excited about. When it was launched in 2002 with the BA-series Falcon, the Barra was available in either as a conventional gas (petrol)-fed, 244-hp unit, or as a fuel-efficient 209-hp version called E-Gass that ran exclusively on liquefied petroleum gas (LPG).

Enthusiasts were given a glimpse of this engine’s true potential in the sportier Falcon XR6 Turbo. A highly acclaimed model right from the start, this performance-oriented Falcon was powered by a turbocharged version of the new inline-six.

Heavily based on the standard 244 hp, the turbo motor featured stronger pistons to lower the compression ratio from 9.7:1 to 8.7:1, Inconel exhaust valves, higher base fuel pressure, and, of course, an intercooled Garrett GT35/82r turbocharger. Easily recognizable thanks to its red valve cover, it could easily produce 322 hp and 332 lb-ft (450 Nm) of torque.

In the years that followed, the naturally-aspirated Barra received a series of upgrades that increased its output figures to 255 hp (2005), then 261 hp (2011).

The turbo version also became more capable. With the XR6 Turbo becoming extremely successful, the Ford Performance Vehicles (FPV) division got involved in its development in 2004. They equipped it with a performance airbox, a larger intercooler, higher strength conrods, a new fuel pump, or a high-flow exhaust system, enhancements that pushed it to 362 hp. Four years later, they were at it again, this time squeezing out 416 hp with the help of new pistons, larger fuel injectors, turbo, and intercooler.

The rarest, most powerful of all factory-built versions came in the limited edition 2016 FG-X Falcon XR6 Sprint. With 436 hp and 425 lb-ft (576 Nm) of torque on tap, it became the most capable inline-six ever produced in Australia.

However, the Barra earned its place among the greatest six-cylinders of all time thanks to the local tuning scene. It all started with the first turbocharged version which inspired many enthusiasts to build their own turbo set-ups. By doing so, they discovered that the engine’s architecture could easily withstand over 500 hp, so they kept pushing in search of its limits. Much to everyone’s surprise, the powerplant seemed to have no limits, so it became the weapon of choice for many Aussie tuners.

Although large and heavy, its tuning potential, availability, and affordability persuaded many to devise swap kits and fit the Barra into all sorts of vehicles. One famous example is Tunnel Vision’s fourth-generation Falcon that you can get to know in the YouTube video below by Fullboost. Powered by an FG-spec, Barra with a stock block, head, and cams, yet beefed up with aftermarket goodies, the monstrous sleeper could make little over 1,000 hp at the rear wheels.

Impressive? Well, the architecture can withstand twice as much when it’s paired with even more upgrades. In 2016, Street Machine magazine featured one such unit at the heart of Dion Amato’s Dodge Avenger drag car. Destroked to 3.9 liters and boosted by a huge Precision billet turbo, this outrageous Barra revved up to 10,000 rpm, sending the car into five-second territory over the quarter-mile.

Since it was only available in Australia and New Zealand, this engine still doesn’t benefit from the vast amount of aftermarket upgrades that are available for six-cylinder legends like the 2JZ. Still, gearheads from all over the world are discovering the Barra and importing it, leading global aftermarket manufacturers to roll out more high-performance upgrades for this amazing powerplant.

While importing one into your country might not be cheap, the unit itself is, and there are plenty of them up for grabs all over Australia. So, if you’re looking for an insanely capable six-cylinder for your next build and it doesn’t cost you a fortune to have one shipped, get a Barra and embarrass custom V8-powered rides, or even supercars that cost seven-figure sums. 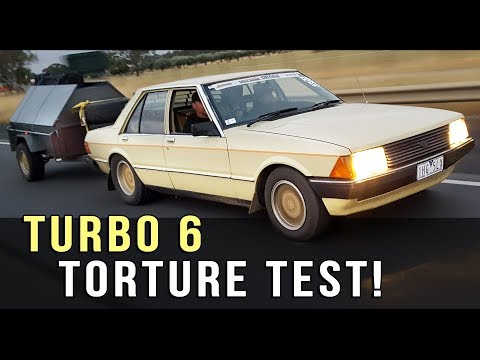