Ford Performance has just released the first bit of information about the upcoming 2022 F-150 NASCAR truck. The company felt it was a good opportunity to plug its first all-electric truck as well, so the F-150 Lightning featured heavily in the short clip alongside Hailie Deegan, Ford Performance Developmental Driver for the NASCAR Truck Series.
15 photos

In fact, you can add the Mustang GT to the list of Ford models making an appearance in the advert, bringing the total number to three - which is probably the most you could hope to fit in a video that is only one minute and 22 seconds long. Anyway, it's all about the F-150 NASCAR truck, and not even the Lightning could hope to steal its thunder.

The EV is pictured as the utility vehicle, being used to tow the NASCAR truck to the test track (Flat Rock Speedway) and, once night falls, to power an extra set of lights so we can get a better look at the real star of the clip. Could they have used a cable extender and plug them into a classic socket? Obviously, yes, but that wouldn't have showcased the truck's ability to power an entire home (or track) with the juice in its battery pack.

The speedway is where the 2022 Ford F-150 NASCAR Truck comes into play, and the clip's soundtrack changes dramatically. The complete silence is interrupted by the raucous V8 under the competition truck's hood (not that there's any real hood there anyway).

Starting with the 2022 season of the NASCAR Camping World Truck Series, the three manufacturers involved (Chevrolet, Ford, and Toyota) will be allowed to carry more extensive modifications to both the front and rear ends of their trucks with the ultimate goal of making them a closer match to their corresponding production versions.

Previously, the lower fascia was identical for all three brands, but that will change starting next season. Ford has also updated the rest of its race truck's appearance with styling cues from the 2021 model, and if anyone's curious to see it in person, they'll be able to do it next February at Daytona. Until then, of course, there's always the not-so-bad option of watching the clip below. 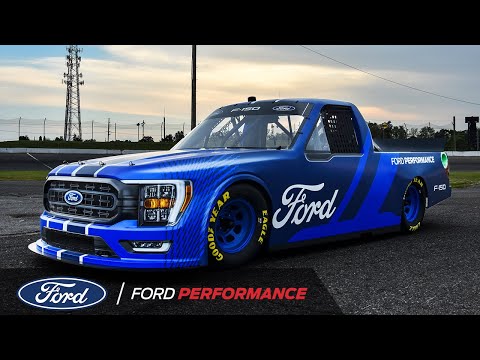