5 Before E-Bikes Were Big, One Collaboration Sparked Four Very Fashion Machines
Car video reviews:
Up Next

Trek has always been a cycling team to keep an eye on. With that said, it's time to check out just what you can own for a tad under $2,000. Oh, and if you haven't figured it out by now, it's a pretty sick hardtail.

Folks, Trek has been making a name for itself since 1975. However, their cycling heritage dates back much further. Nowadays, on the other hand, this crew has grown to be one of the teams you see carrying world-class athletes across finish lines.

As for the bike before us today, it's been dubbed the X-Caliber 9, and it's a race-ready hardtail bike for the XC rider. It's also considered the "top-end model" from the X-Caliber family. Oh, and please don't mistake this lineup for the Supercaliber family. While Supercaliber is also an XC bike, it's on the opposite spectrum regarding price, components, and even abilities. With that in mind, Treks is asking you to dish out 1,930 USD (1,700 EUR at current exchange rates) for one of these babies.

Coming back to X-Caliber 9, One main reason for this bike's lower price is because it's completed using nothing more than aluminum. However, with that aluminum, Trek has put together an XC hardtail with "quick-handling geometry." This is achieved by shorter chainstays, a steeper seat angle, and a 69.5-degree headtube angle.

Since hardtails don't feature a rear suspension, the fork and tires are all you've got to help soften your ride. For this mountain goat of a bike, Trek is throwing on a RockShox Recon Gold RL fork with 100 mm (3.93 in) of travel. Motion Control damper and lockout help give you the ride you want, even if you occasionally hit the streets.

More attention to the frame has been given in the form of internal cable routing and covers everything from the rear brake and cassette to the dropper post. Yes, it has a dropper post from TranzX, a JD-YSP18 with 130 mm (5.1 in) of travel.

Since I mentioned the cassette, let's have a look. For the 9's drivetrain, nobody but Shimano shows up to transfer power from your legs and into the round. An SLX M7100 setup with an M8100 long-cage derailleur is tuned to 12 speeds. The cassette has a range of 10-51T.

As is customary with most Trek bikes, the rest of this machine is equipped with all in-house components from Bontrager. Aside from the seat post and Maxxis tires, rims, hubs, and sealant, are all from this crew. The brakes are also Shimano, with MT410 calipers clamping down on 180 mm (7.1 in) or 160 mm (6.3 in) rotors.

Another trick up the 9's sleeve is its ability to be more than just an XC bike. Because Trek devised the frame with the ability to add a rack to the rear, X-Caliber allows you to explore the possibilities that bikepacking has to offer.

Since some manufacturers on the market also produce cargo systems for suspension forks, you should be able to really deck out your 9. There's a kickstand, too, just in case you're not into flipping your bike upside down while having coffee at a local café. With everything in place, X-Caliber 9 comes in with a weight of 27.61 lbs (12.52 kg) and will support a total load of 300 lbs (136 kg). That's with rider, bike, and cargo.

At the end of the day, the bike looks good, has name-brand components on it, and all the while, leaving you with cash to buy biking attire and a helmet. That's worth considering for this upcoming summer. 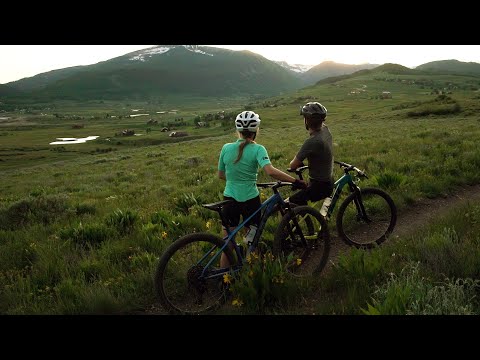