Tesla Cybertruck to Finally Arrive in Cyberpunk 2077 in 2023?

All of that helped the Vanquish S go from 0-60 mph (0-97 km/h) in just 4.8 seconds, which made it Aston Martin’s fastest production car ever at that time. But with more horses, it also needed more stopping power, so it got bigger brake calipers, larger rear discs, and an improved brake pedal assembly.

Moreover, some of the minor exterior changes included new wheels, a rounded front grille and a front splitter to improve stability, along with a new trunk lid spoiler.

Now what you’re looking at here is a very special Vanquish S. Not only because it’s the “only one in this color,” according to Max from AutoTopNL, but more because it’s the actual car that was presented at the Geneva Motor Show in 2007. (There’s a plaque on the driver-side doorstep as proof of that.)

Under the hood, besides the naturally-aspirated 6.0-liter V12 engine, there’s another plaque, which usually has the name of whoever does the final inspection for the car. This particular one says “Press Garage,” since it was a show unit.

You could say the car aged well since it looks and sounds great even today. Press play down below to hear that V12 roar while Max floors it towards 300 km/h (186 mph) on the Autobahn. 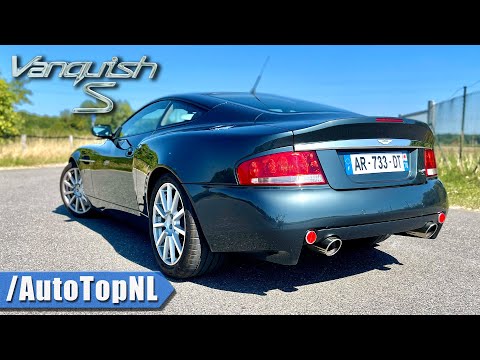