4 2023 Ferrari Purosangue Will Not Be a Traditional SUV

Following a Ferrari Prototype Around Town Is Fun Until It's Not

Home > News > Spyshots
Sebastian Toma
Vehicle manufacturers test prototypes of their upcoming models on public roads all the time. Now, when everybody has a camera in their pocket, doing so tends to favor early and unwanted reveals of designs and other information regarding new models.
17 photos

For years, discussion regarding a Ferrari SUV has made headlines, and it is now a known fact that the Maranello-based manufacturer is launching one. The name is supposed to be Purosangue, but that is not the subject of this story.

Instead, a freshly released video of a Ferrari prototype being followed on a public road by a YouTuber who goes by the name of Varryx goes to show that being a spy photographer has its risks.

While it may be legal in most countries to take a picture of a vehicle that is driven on the street and even film it, going out of your way to follow it might go beyond the gray area. Watch the video below to find out what we mean.

Mind you, dashcam videos and dashcams altogether are not legal in every country of the world, so be sure to be informed before getting into trouble. In some countries in Europe, it is against the law to post pictures and/or videos of a vehicle driving on public roads if its license plate number is not hidden, or if its driver's face is visible.

It depends on each country, though. We are not lawyers here and this is not legal advice. Instead, it is just as a head-up to be informed about differences in law between various countries. Keep in mind that not knowing a country's laws does not make you exempt from their consequences if you (unknowingly) do not follow them.

With that out of the way, we get another chance to see Ferrari's upcoming SUV, which is expected to be revealed later this year. This time, it is driving at city speeds, so there is no engine roar, and the suspension has a different job at hand. 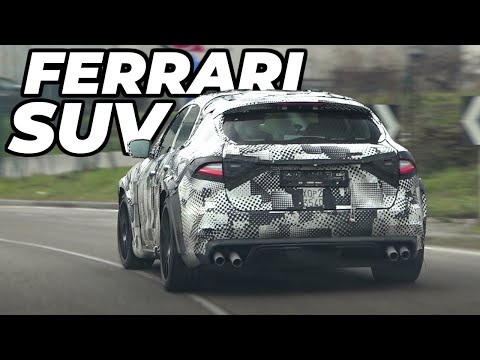 Editor's note: For illustration purposes, the photo gallery shows various other images of the prototype of Ferrari's upcoming Purosangue.