Earlier this year, to kick off 2022 on a high note, the design studio introduced the Air Yacht, a new hybrid concept that was just what its name implied: a superyacht for the skies. Technically, the Air Yacht is a blimp that can also float, so while that’s not the innovative part, it stands out for how luxurious it is. Or, better said, for how luxurious Lazzarini imagines it could be.

You may have heard of “manifesting” and how it’s the latest and hottest trend among celebrities and influencers. Manifesting is the practice of thinking aspirational thoughts with the goal of making them happen, of willing them into existence. In other words, if you want to be rich, you’d better start manifesting as a rich person, acting, and, more importantly, believing that you are. Actual wealth will soon follow.

Lazzarini is manifesting this Air Yacht. Some time after the big online premiere of the hybrid airship, the design studio debuted the updated version, aptly called Air Yacht V2. It’s bigger, it’s faster, and it comes with a much sleeker- and futuristic-looking central hull. Whether it’s better is best left for another conversation since we’re still in the realm of hypothetical flying superyachts.

As one, Air Yacht V2 is as stunning, if not even more than its predecessor. It uses the same tri-hull configuration, with twin blimps slash twin hulls for propulsion and flotation, respectively, and the main hull as a command deck. What changes is that the flying superyacht now uses less glazing and more carbon fiber, which, with the added 19 meters (62 feet) to the total length (from 150 meters / 492 feet to 169 meters / 554 feet), gives it an extra boost in speed.

Based on the designer’s estimates, V2 can travel at top speeds of 100 knots (115 mph / 185 kph) for 48 full hours. In the history of aviation, blimps were never quite famous for speed, so should Air Yacht V2 ever happen, it would be setting new records. That’s a big “if” there, however.

As with its shorter and slower sibling (the original Air Yacht can only max out at 60 knots / 69 mph / 111 kph), Air Yacht V2 comes with the twin blimps filled with helium, solar panels throughout, light batteries, and eight counter-rotating electric motors of 950 hp each. The motors are for propulsion and for landing on water. Once the flying superyacht touches the water, it can only go as fast as 5 knots (5.7 mph / 9.2 kph), which is as far from what you’d deem superyacht-worthy performance as possible.

What Air Yacht V2 lacks as a superyacht in terms of performance, it makes up for in comfort. It offers accommodation for some 20 people in ten cabins spread equally across the two blimps, as well as a master suite located on the central hull for maximum privacy.

The central hull is smaller and sleeker now, so some of the luxury features present in the original had to go: a pool is no longer visible on the upper deck, and what is shown of the area reveals that the most space is occupied by the command deck. That said, an observation lounge and a dining area are also said to be included, even if not shown. At the rear of the aft hull is a large open deck, accessible via a grand staircase, which can serve as a beach club when floating or the most thrilling open-air observation lounge in flight.

Airships or blimps have a long and controversial history; let’s just say that there is a very good reason why there aren’t any hauling tourists or private individuals today. But several projects do aim to bring them back for wealthy tourists: Celera 500L and Airlander are perhaps the most notable examples. Air Yacht V2 is vying for the same kind of attention, though only on (virtual) paper for the time being. 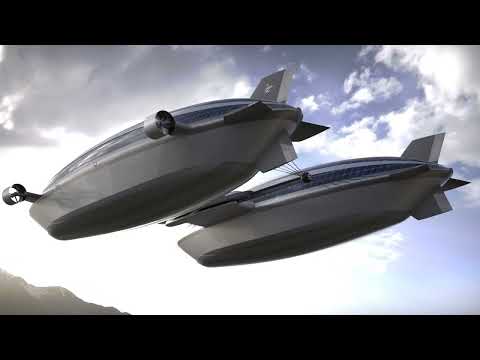