Fly Over 120 Star Citizen Ships for Free Until December 1

Home > News > Videogames
19 Nov 2021, 17:54 UTC ·
by Cosmin Vasile
Star Citizen is looking for fresh pilots, so are you up to the challenge? To make the offer more appealing, Cloud Imperium is running an extended free trial for players who wish to test many of the Star Citizen’s ships before investing in the game.
8 photos

If you’re not aware, Star Citizen ships cost real money. Not only that, but some of them can be really expensive, so if you’re considering getting into Star Citizen, this would a great time to check some of the ships that can be purchased and flown in the game.

Starting November 19 and until December 1, Star Citizen is running a galaxy’s premier annual aerospace event, the Intergalactic Aerospace Expo (IAE). The top ship manufacturers across the universe are showcasing their latest aerial vehicles and concept ships to both newcomers and veterans.

During the show, six important ships will be revealed, including the Aegis Redeemer, Ares Ion, Ares Inferno, and several special surprises. For the next 13 days of celebration, free test flights for over 120 flyable ships will be available for Star Citizen players. Additionally, the game will be free-to-play from November 19 through December 1.

Cloud Imperium also announced that IAE 2951 attendees can look forward to a brand-new ship from manufacturer Argo Astronautics on November 25, and a big surprise from Musashi Industrial and Starflight Concern (MISC) on November 27.

Star Citizen veterans might want to keep their eyes peeled for two new variants of the Ares Star Fighter: Inferno and Ion. The former is armed with a S7 laser cannon and excels at long-range combat, while the latter comes packed with a S7 ballistic gatling cannon better suited for mid-range combat. Both these Star Fighters are perfectly suitable for dealing damage to large and capital level ships.

Have a look at the brand-new Star Citizen IAE 2951 trailer and check out the game’s website if you want to sign up and start flying today. 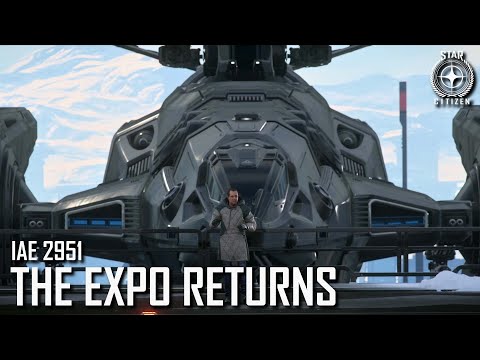